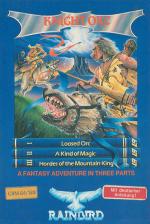 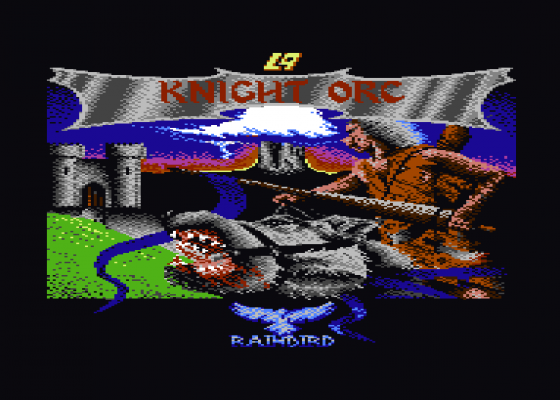 The Wiz has yet to play a C64 version of this game so this is a preview rather than a proper review. However, as Knight Orc is a crucial release from Level 9. I'm bringing you my impressions of the game as played on the Atari ST.

The days are passed when the Austins were the only people to take the adventure market seriously - and, as a result, were the only people taken seriously by adventurers. Level 9 were kings of the cassette market, but nowadays disc drives are becoming more common - as are machines with more memory and better graphics facilities. Level 9 made their name with text compression and text-only games - but can they survive in the new era?

The game comes with a chunky booklet including full instructions for play and a short 'novella' detailing the exploits of Grok Grindleguts and other orcs. It's quite readable stuff, incorporating a gay dragon, a hoard of treasure, a tavern and a sense of humour. The novella sets the scene for the game itself which falls into three sections - Loosed Orc, A Kind of Magic and Hordes of the Mountain King. However, you don't have to read the novella to get on in the game. 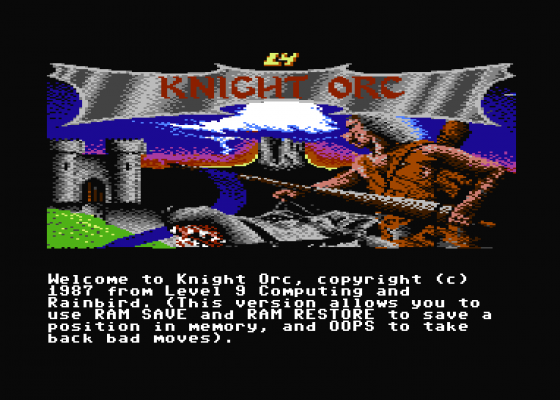 Apart from an upgraded parser the real difference between Knight Orc and previous Level 9 games is the inclusion of interactive characters. As Pete Austin remarked recently 'The range of puzzles you can have that involve picking up and using objects has been thoroughly explored - introducing characters has to be the next step'. No sooner said than done it seems.

In Knight Orc, as you control the action of orcine Grindleguts you can FOLLOW another character, address another character using the NAME MESSAGE format, and even WAIT FOR another character to arrive. Much of the game's challenge lies in recruiting allies, so you'll find yourself doing quite a bit of communication.

One of the best aspects of this interaction is the ability to 'queue' commands to other characters. The manual gives this typical example... 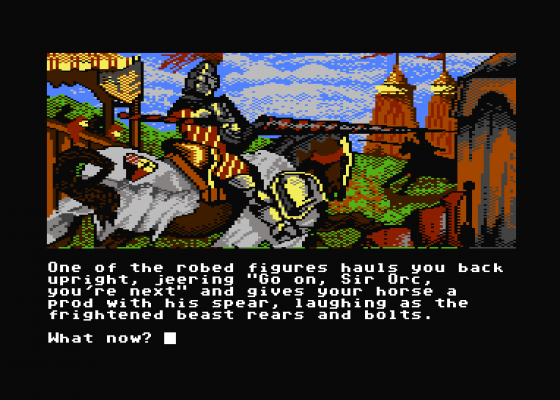 Entering the above three commands in sequence outside the vampire's lair brings all three of you into the lair for a simultaneous attack on the blood-sucker.

The fact is however that Level 9 still have a lot to learn when it comes to actually programming interactive characters. There are occasional gaffs, as in... 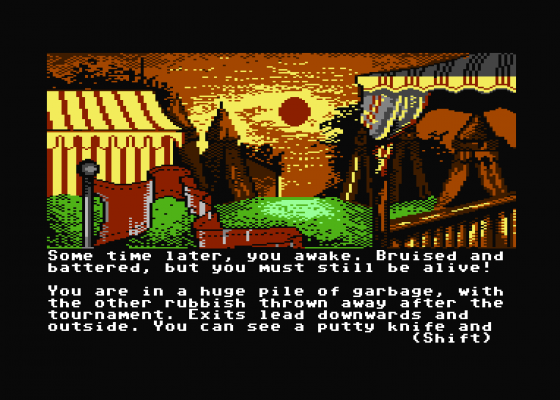 DENZYL WHO ARE YOU

To which Denzyl relies "I'll get onto it at once". Hmmm...

Denzyl and other characters also suffer from the program's rather unconvincing technique of printing little messages about them at intervals - as if to persuade us that the characters really do have lives of their own. So as you hang around Denzyl, the program will suddenly come up with 'He mumbles quietly' or something similar. This is a bit like The Hobbit where Thorin 'starts singing about gold'. I can understand the designer's intention behind such messages, but after a while they become jarring and unconvincing. Magnetic Scrolls' characters (and Infocom's) don't advertise their presence quite so obviously - and are more effective as a result. 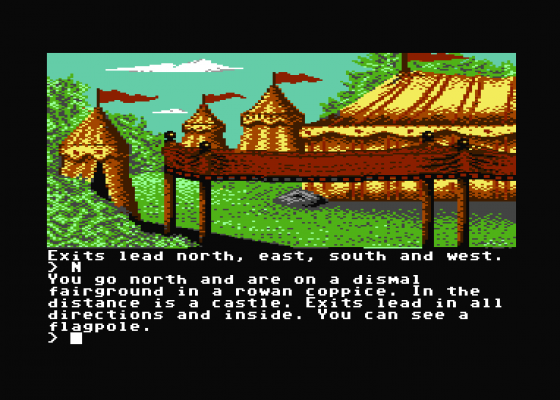 Like all of Level 9's recent games, Knight Orc comes complete with graphics. As I said, I've only seen the ST version, but this was enough to persuage me that the company have taken heed of previous criticism on the piccy front. The graphics are quite unlike those of their earlier games, and I expect that people will either love or hate them. I've included an ST screenshot so you can see what I mean. The effect is slightly like one of watercolour, and I found them a very effective contrast to the usual approach of trying for an almost photographic realism (as in Guild Of Thieves).

The company have also taken a leaf out of Magnetic Scrolls' book by making the graphics scrollable - you can scroll them up and down the screen as required. Unfortunately the effect is rather jerky, but perhaps they'll fix this in the production versions. I certainly hope so - if you're going to borrow other people's ideas you've got to equal them at least, otherwise you run the risk of appearing naff.

As for the subject matter, well... I'm not quite so sure about this. The Pawn may have been 'way out', and Guild Of Thieves may be more successful because of its traditional structure, but I can't help feeling that Knight Orc carries things a little too far backwards. Okay, so treasure magic and battles are great topics for an adventure, but do we have to stick to Middle Earth-type scenarios? Aren't we all just a teensy-weensy bit sick of Orcs? Can't we think of a new way to introduce special effects into a game rather than relying on the old CAST SPELL command? Apparently not...

So what's good about Knight Orc apart from the characters? The parser has been improved and you can now GO TO or RUN TO another location. You can also FIND an object and use the words EVERYTHING and EVERYBODY. The use of EXCEPT is also allowed. I don't think that anybody's going to have cause to complain about the interaction.

Secondly, the game (like all Level 9 releases) doesn't shrink from occasionally taking a pot-shot at the real world. Whether this appeals to you or not depends on your own views of society. For example, if the idea that a dubious member of the clergy might in fact be a 'sweaty paedophile' appeals to yuo, then you're sure to enjoy Knight Orc's social 'observations'.

Finally there's the usual Level 9 sense of humour throughout. Sometimes it gets a bit 'cliquey' - anyone who's never played MUD in particular will find the first few minutes quite baffling. I did actually laugh occasionally as certain male voices cried out in the distance.

The nitty-gritty is that nowadays we are seeing an increasing involvement of more accomplished games designers in adventure writing. Scott Adams and Adventureland have been replaced by Douglas Adams and Hitchhikers, and powerful game generators like the system used by Magnetic Scrolls are being made available to more writers. More importantly though, adventurers have come to expect a bit more than the old 'fur between the toes' magic spells and fire-breathing dragons.

With Knight Orc, Level 9 look set to demonstrate that in matters of programming techniques the company are going to maintain a strong position in the market. The question of game design is less easy to answer, but then that problem can be solved at a stroke by bringing in better outside authors. In the meantime, the final verdict on Knight Orc must wait until we extensively play-test the Commodore version.