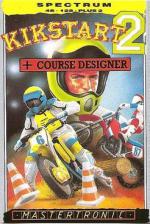 Now, correct me if I'm wrong, but I was never aware that Kickstart was ever available on the Spectrum, but I suppose that it must, otherwise they would never have released Kickstart 2, or would they? They released Speed King 2, but the original was never laid under the rubber mat, so to speak. But Grim is waving his hand frantically at me, so I better stop criticising M-tronic's release style and get down to steel pins.

KS2 is, to put it in a pigeon hole, a two player, horizontally scrolling scrambling simulation. You know what scrambling is, you've probably seen it on the telly (Well I know that none of you have ever done it because you're either glued to your Spectrum or glued to SU, reading my wicked reviews). It's that weird sport where everybody rides round on undersized motorbikes (The Reliant Robins of the Honda world) trying to get over such obstacles as tyres and narrow walls. To completely reproduce the sport on a computer, it would need bike steering control as well as speed and wheelie options. No mean feat, so M-tronic have opted for a far simpler side view in which you take it as read that your on screen counterpart is perfect at steering and has left it up to you to do the rest.

The screen is split in two halves with each of the two players (or one player and the computer) taking a view. A speedometer in the corner tells you your velocity, a feature vital when attacking some of the obstacles on the 24 courses. Why speed? Well all the objects take a different tactic to cross. For example, the brick walls must be driven across very slowly but wheelies are allowed. On the other hand, you can travel as fast as you like across the picnic tables but if you try to lift your front wheel off you go.

One question that bugged me right from the word go, and is probably bugging some of the 80,000 readers out there, is, 'How does it measure up with the Commodore version?' Very well, thankyouverymuch. In fact I would go so far as to say that in feel, playability and graphical quality they are identical. But one thing is missing. I know it's missing because I have a very keen sense of hearing. Blind people normally do. (re Letters Jan issue). The Spectrum 48K version of KS2 has no sound whatsoever. Not even a peep. It's a little off-putting, not so much as a beep as you fall on your head for the teenth time Not a blip as you unsuccessfully navigate some pot holes. Not a sausage. Oh well, you can't have everything.

But, I hear you cry. Is that all. No. Dillonites (Dillonites? I'm not at all sure about this - Ed), that is not all, for not only do you get 24 complete courses set over dry land during the day or night, or snow even, but you get a full spanking course designer which allows you to build, without planning permission, a complete new track. Ooooh! The designer is very easy to use and once you've created the track, you can race on it. All fer two knicker. Now that's what I call a bargain!

Graphically pleasing and with a great atmosphere of 'just one more go'. Shame about the sound.

Graphically pleasing and with a great atmosphere of 'just one more go'. The designer is very easy to use and once you've created the track, you can race on it.