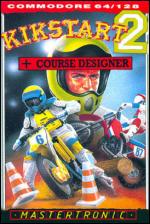 Rev that throttle, pull a wheelie and burn across the dirt track - Kikstart is back with a vengeance. This enhanced version of the classic motorcycling simulation boasts 24 new courses, improved graphics, tweaked gameplay, a couple of new hazards and a course designer.

Either one or two players can tackle a combination of five courses at one time. The screen is split horizontally, with each motorcyclist viewed side-on. There are five separate timers above each display (one for each course), a total time elapsed meter and a speedometer.

The start of a race is announced by a klaxon, and both cyclists zoom off over the scrolling courses. The bikes accelerate, decelerate, wheelie or jump, depending on the way the joystick is moved.

Hazards litter the courses. Steps and Picnic Tables are jumped over, and Tyres, Hedges and Barrels have to be crossed quickly - however, the opposite is the case for Ramps, Sand Pits, Brick Walls, Screen Walls and Gates. Mud patches slow the bike down and spikes and flame shooters completely wreck it!

If an obstacle is attempted incorrectly, the rider is toppled and the landscape scrolls swiftly to the next convenient position where the rider can be put back on the course. When the screen is scrolling, the timer counts twice as fast as a penalty for the mistake.

When you get bored of riding the preset courses, the editor can be accessed from the title screen to create new routes. When a course, or series of courses have been created or modified, they can be raced over and saved to tape or disk for later use. Now you can build the most horrifically difficult courses and challenge your friends over them - hee hee!

After being none-too-impressed with the first Kikstart (and the subsequent 128 version), I am slightly less disenchanted with this latest offering. To say the graphics have been improved is something of an understatement - they're now very smart indeed and give the game a much-needed shot in the arm.

Unfortunately, however, the gameplay remains very similar to the first, and I find it rather frustrating and tiresome to play. The course designer is, without doubt, the real star of the show, and for fans of the original it should more than justify the purchase of this new version. After all, it's what they've been after for the past two years.

This is it! Exactly what us Kikstart fans have been waiting for. The graphics are vastly improved, with far, far better motorbikes and backdrops. The addition of a speedometer and slightly tweaked controls make riding the bike slightly easier and more precise - you can now attain the right speeds for negotiating obstacles without the need to guess.

The screen editor takes a couple of hours of getting used to, but courses are assembled easily enough once the designer is familiar. The best thing though, is that the editor and game are both loaded at once - there's no clumsy loader involving several loads and re-loads. Kikstart II is extremely well thought out, offering two player simultaneous action, a brilliant computer opponent and an excellent screen designer for only two pounds. How can you resist?

If you've got little patience and are easily annoyed, then Kikstart II could drive you hopping mad. If you're like me and love the Kikstar series, you'll love every minute of it. Controlling the bike is frustratingly hard to master, but the game's great addictiveness keeps you playing and playing.

When you get bored of the 24 programmed courses, you can design your own with the built-in screen editor. At two guid, Kikstart combines great value for money, variety, addiction and long-lasting appeal.

Presentation 91%
Very polished and user-friendly, with one or two player option and a well thought out designer.

Graphics 69%
Much improved over the original, with lovely use of colour.

Lastability 90%
Twenty-four courses *and* a screen designer to keep you scrambling for months.

Just what Kikstart fans are waiting for. Twenty-four courses and a screen designer to keep you scrambling for months.