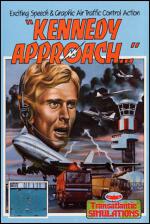 Air Traffic Control is one of the world's most demanding professions. Every minute in the tower a Controller is called upon to make life or death decisions for thousands of passengers and crewmembers...

So starts off the introduction in the booklet to this new simulation from US Gold. ATC Simulations are not everybody's cup of tea, high speed action is not the order of the day, but lightning fast thinking often is. Kennedy Approach offers you the opportunity to test out your suitability for this 'demanding' job at five different American airfields, Atlanta, Georgia, Denver, Colorado, Dallas-Fort Worth, Texas, Washington, DC and finally the nightmare to end them all, Kennedy-La Guardia, New York, New York.

After loading, you can load an already saved game from disk or watch a demo. Starting a new game is done by selecting a skill level (1-5) and a city from the 5 available. Then it's time to log onto the computer with your password. These are supplied in the booklet.

Various displays are available to you in your job as controller. The Control Area Map, which shows the overall control area for the airport, is the largest part of the main display. This is overlaid with a grid of dots (1 mile apart), brighter ones denoting normal air traffic lanes. There are entrance and exit fixes marked, the places where flights usually enter and leave your area, as well as the Approach VOR Tower, a beacon around which flights are made to 'hold' or circle until a landing slot is arranged for them. Codes for the various planes in your area are also indicated, with a separate graphic to show the three types used in the simulation, light planes, jet airliners and Concorde. Another vital indication is given with terrain features, restricted flying areas, and weather conditions.

Above the map is the Command Line, an area of information in text form. Messages from yourself to a plane are displayed here, as is the pilot's response. There is also a Flight Plan section for every plane in your area. They are designated by an ID which is made up of two letters (first letter of origination and first letter of destination) followed by the plane's altitude in thousands of feet. A clock measuring real time tells you how long you are into your shift, which must end on the dot, so you experience all the real pressure of the job! Finally, there is an Alarm Area where dangerous situations are reported.

Issuing commands to a plane is made simple with the joystick. There are two ways of establishing contact; you can either type in the ID number, or you can use the joystick to move a cursor over the aircraft's symbol on the map. Communicating instructions about height, heading and speed is done in a similar way, by moving the joystick left/right or up/down until the required figure appears between the arrows in the Command Line. When your message is transmitted you hear it, as well as the pilot's response.

Kennedy Approach contains a large number of variables to make the simulation as realistic as possible, and the object overall is to promote yourself from the 'graveyard' shift at Atlanta to handling the two New York Airports on skill level 5. The complexities it offers make it impossible to cover them even slightly in a review!

This is the only air traffic controller program I've seen, other than Hewson's Heathrow ATC. It's one of the few games I've played where the speech is more than just a gimmick, as it actually makes the game as good a simulation as it is. The quantity of speech is staggering, especially considering its extraordinary quality. Graphics are simple, but adequate, and the control approach (no pun intended), a novel and effective one. Personally, I find this form of 'flight simulation' unappealing (although I did derive several hours of frantic run out of Kennedy Approach, what with planes appearing inconveniently out of the blue whilst I was trying to organise the flight path of others - taxing is not the word!) but I feel it is a good one that will certainly please those interested in this sort of game (Cliche! Cliche! Seriously though, I mean it)!

Contrary to some of my fellow Air Traffic Controller colleagues, I found it all too frighteningly easy to cause mid-air collisions! This is unlike Hewson's older Heathrow ATC, another very good simulation, where it is almost impossible to cause an accident. I've got a sinking suspicion that Kennedy is more realistic in this! Realism is the word too, the graphic radar display is excellent (actually a bit better looking in black and white), and when the constant too-ing and fro-ing of cross talk from the tower and pilots is thrown in, it is easy to lose yourself in this simulation. The speech is marvellous, completely realistic, and it certainly adds a thrill when a calm voice flying over 300 passengers suddenly announces that there is only fuel for three more minutes flying and you know you can't get him down in time. I'm not sure of how many people really enjoy this sort of game, but it's the most 'approachable' one I've ever played and an absolute must for the fanatic.

I haven't played any air traffic control simulations, so this was quite a novel experience. The thing that really impressed me about this game was the speech - absolutely superb and lots of it! Apart from the speech though, there's not a lot to keep you interested for long, especially as you can't even make planes collide in mid air or even blow up! Perhaps an air traffic disaster program would be a touch more interesting.

Presentation 85%
Good, easy to read instructions and introduction with plenty of skill options.

Graphics 71%
Very good for what they do and convincingly real.

Sound 92%
Stunning speech, makes up for lack of other sounds.

Hookability 74%
Control method and instruction make it easy to get into.

Lastability 79%
Specialist appeal maybe, but five airports should keep you going for ages.

Overall 83%
Best of its kind to date, and offers fun, thrills and spills as well as brain expanding.

Specialist appeal maybe, but five airports should keep you going for ages. Certainly the best of its kind to date.