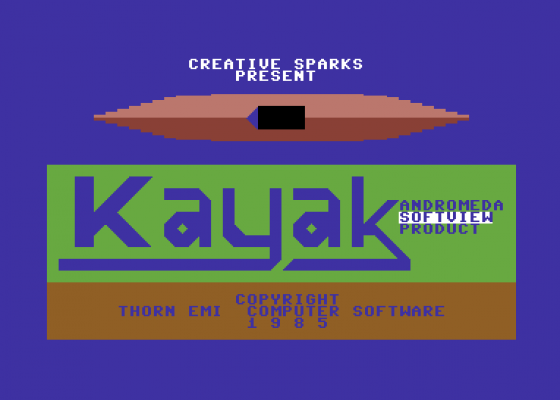 There have been many variations on the 3D racing theme since the release of Pole Position in the arcades a couple of years ago, and Creative Sparks have obviously decided it's about time they had something to offer in the form of Kayak.

As the title suggests, this is a water-based 3D racing game that puts you in the driving seat of a kayak (a form of canoe). Instead of battling your way around the harsh surface of a race-track, avoiding cars etc, Kayak has you bobbing down the length of a not-so-serene river, weaving in and out of markers. No waggling or actual paddling needed here though, as your kayak seems to be equipped with some form of outboard motor - pushing forward on the joystick gives you an increase in forward speed and pulling back slows you down. Turning the canoe is also made simple, as you only need to push left and right to move in the respective directions.

The first course (sounds rather like a menu than a game) presents you with some tricky-to-negotiate 'gates' which must be passed through correctly, so as not to incur any time penalties. So long as you keep the white flag to your left as you pass through a gate, then it will have been cleared successfully and a little black square appears at the top of the screen to let you know you have done so. If you clip a flag while passing through a gate then a white square appears. Missing a gate adds a time penalty to your final time and no little square appears (shame). 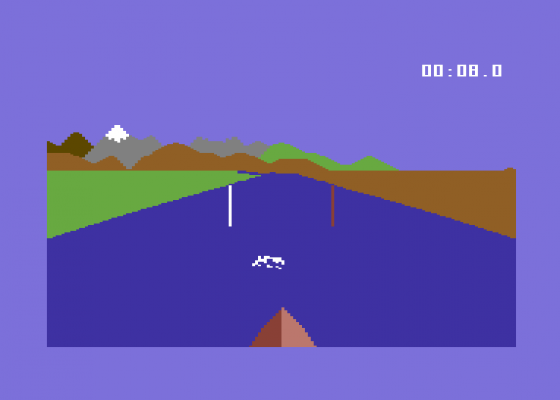 Small currents (not of the little black variety!) appear along the course and throw you off direction should you run into one. These currents usually appear right in front of a gate to make life awkward and generally foul things up for you. The time you are taking to complete the course is shown in the top right of the screen and at the end your final time and any penalties incurred along the way are given. You then move on to a tougher course - the fish course perhaps?

This is a novel, if somewhat slow, Pole Position, which takes place on the water rather then the track. Graphically it's excellent, if rather slow, and the game allows you to actually turn right round and head up the river. There's plenty of challenge for any budding white water champion and the courses are all pretty difficult and challenging - some of the rapids make precise control of the kayak highly difficult. I quite enjoyed playing this and it certainly makes a change from the usual speedy race games. Although we've given pretty low overall ratings, I can see this being a really popular game with the canoeing fanatics.

Other than New Generation's excellent Shoot The Rapids and the superb kayaking event in the stunning Summer Games II, this is really the only canoeing game on the 64. The Pole Position-style 3D view is a good one and gives a new approach and feel to this sort of game. Sound is a bit week, with a meagre tune and minimal effects. Steering the canoe is slightly sluggish and isn't exactly realistic, but it's still fun to play. A good variation on the Pole Position theme that won't break the bank. 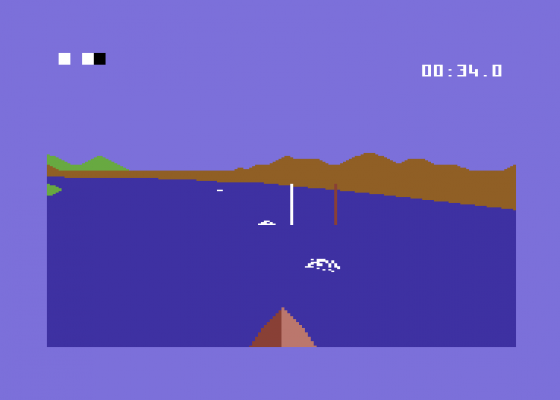 Hookability 70%
Splishy splashy fun in trying to beat the courses.

Lastability 64%
Little variation in the 24 courses but some playability. 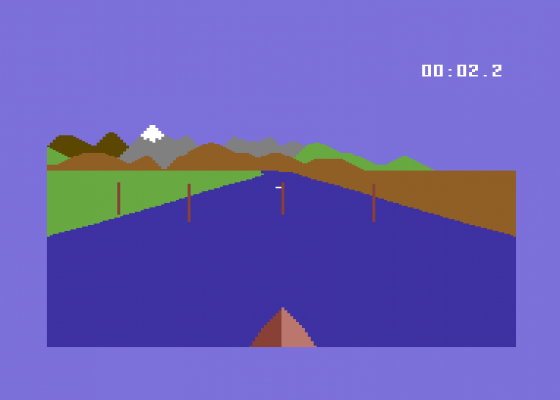