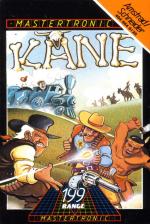 Bite and bullet and fork out £1.99 for Kane. You probably won't regret it.

The game, in which you play the part of the sheriff trying to make peace with the Indians, is in several parts. In the first part you must earn peace tokens by shooting down birds with a bow and arrow. Each token gives an extra life. Stage two involves a gallop across the desert, jumping bushes and rocks until you reach the town of Kane. The third stage is set in the town. The sheriff is ambushed and must shoot the sneaky citizens as they pop out of doors, windows and side streets.

Kane was good fun on the Commodore and is equally fun on the Amstrad. We like it. Honest, njun.

Kane was good fun on the Commodore and is equally fun on the Amstrad. We like it. Honest, njun.