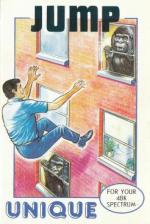 A game that I have been looking out for at the software stands that seem to appear in all the stores now has finally arrived - Jump by Unique, is an arcade-type game where you are in control of a man climbing his way up a tower block of flats. You have six controls to move either arm or leg and to move left or right. This is far too many for keyboard operation and unless you possess nimble fingers, you may find it quite a task. I think it would have been a good idea to include a joystick option, especially as this game is directed only to the arcade game enthusiast.

Controlling your fingers, you must climb up the tower block, keeping an eye open for the windows, which mustn't shut or close as you will find yourself falling to the ground. These windows are opened and closed by mad apes, who also throw plant pots at you in an effort to get you off their tower block.

An interesting point to note is that in the instructions we are told that apes have overtaken the tower block and at the introduction screen, we see an ape appearing at the window, but as soon as the game starts, Darwin's Theory of Evolution takes place and all the apes have changed into men!

The flower seemed to come at incredibly random moments, as quite often there is no chance of escape. This certainly made the game more of a challenge - not to be beaten by these apes (or men).

The music is good and the very detailed and smooth graphics are excellent, although they can get a bit boring after a time. This game, though, is a sure must for any arcade freak (or window-cleaner).

The music is good and the very detailed and smooth graphics are excellent.