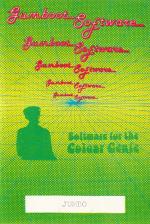 Jumbo 747 was first written for the TRS-80, BBC and Dragon and has now been adapted for the Colour Genie.

The program loads by the SYSTEM command but is mainly in Basic. It loads in just under two minutes and immediately builds up the control displays for the cockpit. Unfortunately, there is no view of the aircraft. This is incidental since it is fatal to take your concentration away from the display for any length of time.

The program includes a comprehensive instruction manual which can be confusing if you do not resist the urge to play the game without first studying the instructions in detail.

Control is by either joysticks and keypad or keyboard alone. If joysticks are used then some, but not all of the keyboard keys on the computer are ineffective. In general, the keyboard is more responsive although some controls, particularly the flap control is frustratingly stubborn as to whether it wants to operate or not.

The graphic display of the instrumentation is clear though mainly digital. Whilst the route selection is a good demonstration of LGR plotting (see Oct/Nov Gum).

The sound is not only realistic but also deafening, and makes good use of the PSG.

In conclusion, I have found this program to be very entertaining and it certainly has that "I'll just fly from Birmingham to Manchester while you get the car out" quality.

My only criticism is that it is overpriced and that an in-flight mode would be useful to get the feel of the controls. There is an excellent practice landing facility which is very absorbing.

Editor's Footnote: Jumbo is not for the casual arcade player! Is it not a fast, zappy game but is very absorbing for anyone who has patience and determination to fly a 747.

There is an excellent practice landing facility which is very absorbing.