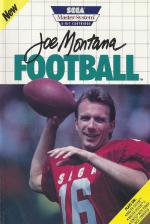 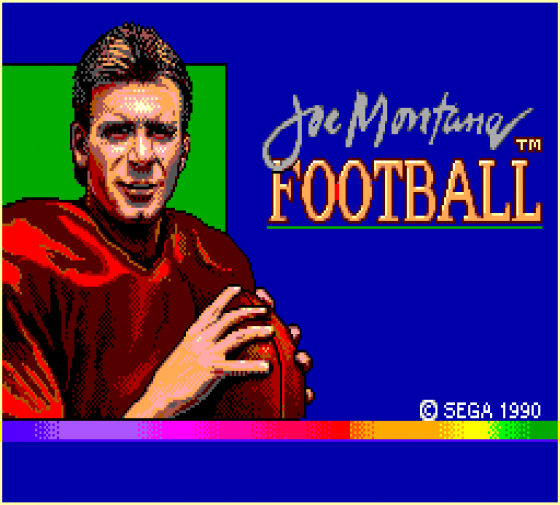 The men with the funny-shaped balls are back in another American Football outing on the Sega Master System. The rules of the game are relatively simple. The game is split into four quarters and the aim is to score a touchdown by getting the ball to the end of the opposition s half of the pitch. Not surprisingly, the opposition are out to stop you and try and score a few touchdowns of their own.

If you've got the ball your aim is to progress at least ten yards up the pitch in order to claim your first down. The defensive team's job is to stop you getting those ten yards by bringing the players down. The offensive team get four chances at getting their first down. If they do get it then they have another four chances to progress another ten yards. If they don't then the opposing team get their chance to get a touchdown.

Occasionally, during a play the offensive team may fumble the ball. If the defensive players can intercept the ball without it hitting the ground then they can claim the first down. Six points are awarded for a touchdown, and an extra kick could award you an extra point. Three points are given from a successful field goal. 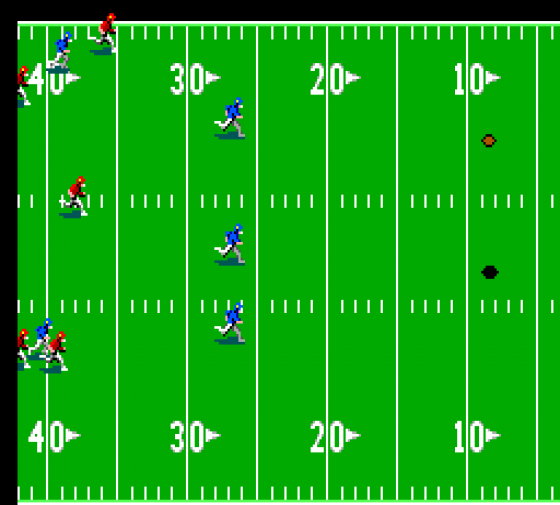 This Sega cart replicates all of the action of American Football, with liberal dollops of advice from Mr Montana himself (apparently he's the World's greatest living quarterback, so there you go).

Gaining yardage is reliant on the use of tactics. Here, at this screen, the player chooses the tactics he's going to use during the next play. Running and passing plays can be selected from the playbook and these dictate how your next play is carried out. If the clock's running low. you can select "time out" which stops the clock. Options also exist to punt the ball down the pitch or attempt a field goal.

There aren't quite so many options for the defensive team. A time-out can be called if you want the clock to be stopped, but other than that, it's down to the playbook to choose a suitable defensive posture Should you choose a straight blitz and get the ball down quickly, or should you leave a few players back in case the offensive team go for a throwing play? Decisions, decisions... 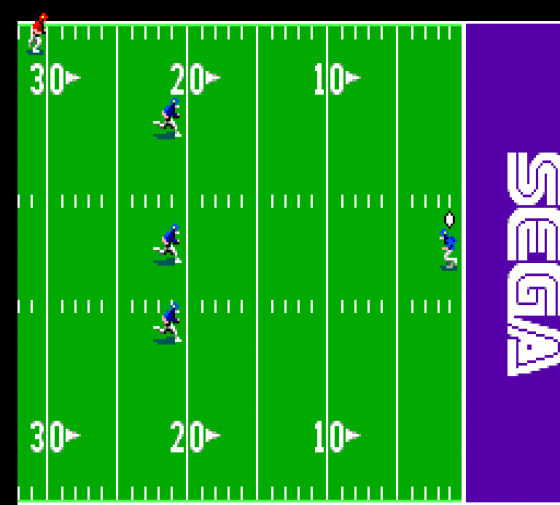 This screen enables you (and your chum if he's playing) to choose the team you wish to play as. There are 28 different teams to choose from. Playing the game is the only way to find out how differently each team plays, because the accompanying manual isn't telling! Instead, you'll have to rely on Joe Montana's advice given freely during the game.

Like most sports sims, Joe Montana football has the option to let two players play against each other. The gameplay isn't significantly altered from a one player games, except that there's bluff button built in for when you're selecting what type of play you're going for. This means that your chum can't guess your tactics beforehand. Cunning, eh?

Just like John Madden Football on the Megadrive, this game gives you the low-down on how your team performed during the half All aspects are covered, including passing and rushing yards. It's then possible to spot possible weaknesses in your team's performance. Armed with these indispensable facts, you should be able to improve your performance in the next half. 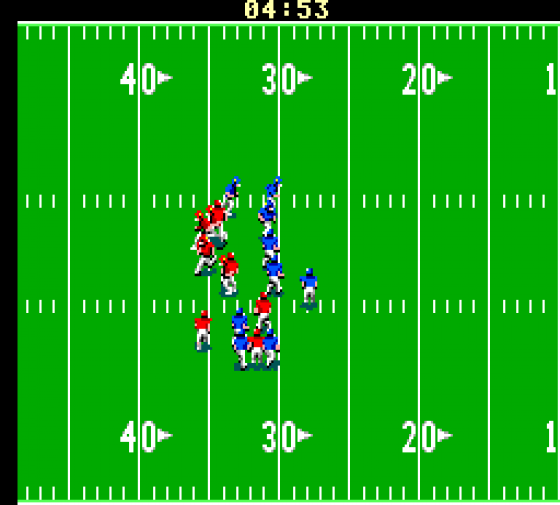 Joe Montana Football on the Megadrive suffered because it was nowhere near as good as Electronic Arts' John Madden Football. Funnily enough, the same is true of the Master System conversion when compared with the ageing American Pro Football. The gameplay, graphics and sound just don't compare to Sega's previously released American Football game and this by itself is enough to stop me recommending this effort. It's a shame really, because Joe Montana Football isn't terrible. The graphics, although small, do the job pretty well and the sound is above average for the Master System. The choice of plays is also pretty varied and the ability to bluff your opponent is quite good. Unfortunately, Joe Montana Football isn't at all exciting to play and the action can hardly be termed as addictive. I'd forget about this new release and go for American Pro Football.

When you look at it on its own, Joe Montana's Football isn't particularly brilliant. The graphics and sound are average and although there are plenty of plays to choose from, the game simply isn't exciting or challenging. Compare it with the two year old American Pro Football and it looks even worse. APF has far more depth, better graphics and really enjoyable and addictive gameplay. So if you're an American Football fan you'd be much better hunting for a copy of American Pro Football, rather than making do with this disappointing sports simulation.

Sound 69%
Bland sound during the game.

Playability 66%
Control is very responsive and the tactic screens are easy to understand.

Lastability 68%
28 teams and a two-player mode mean that this has quite a lot in store if you can keep playing.

Overall 65%
Not exactly an exciting sports slm, and overshadowed by the older, but far superior American Pro Football.

Not exactly an exciting sports slm, and overshadowed by the older, but far superior American Pro Football. 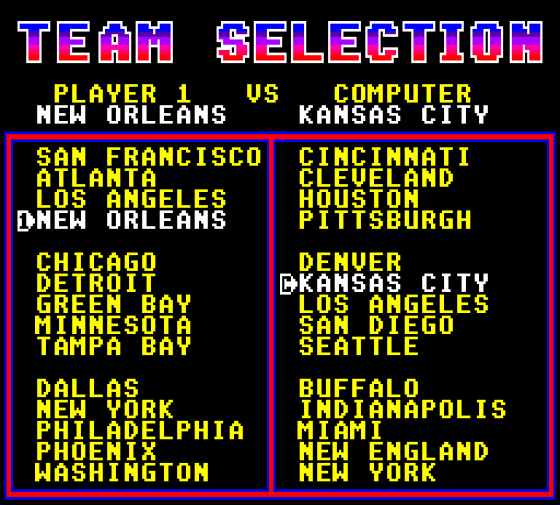 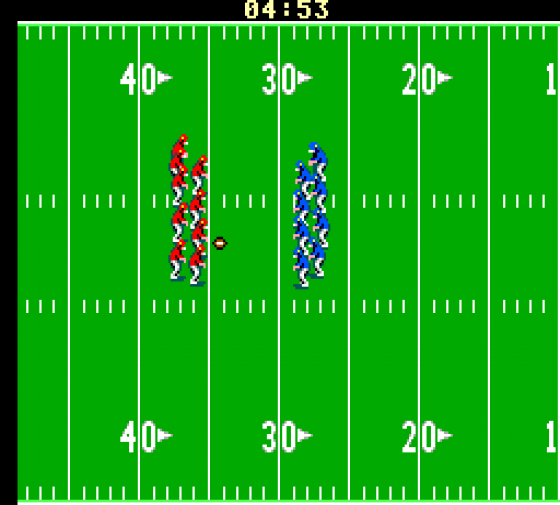 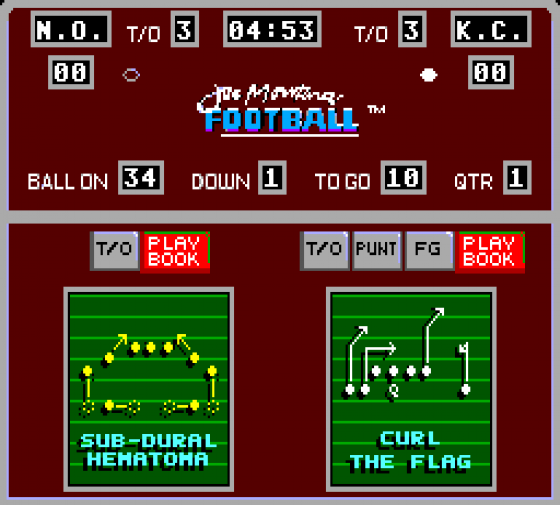 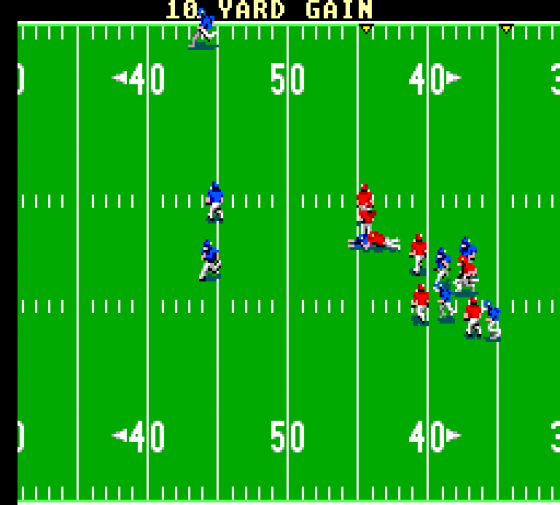 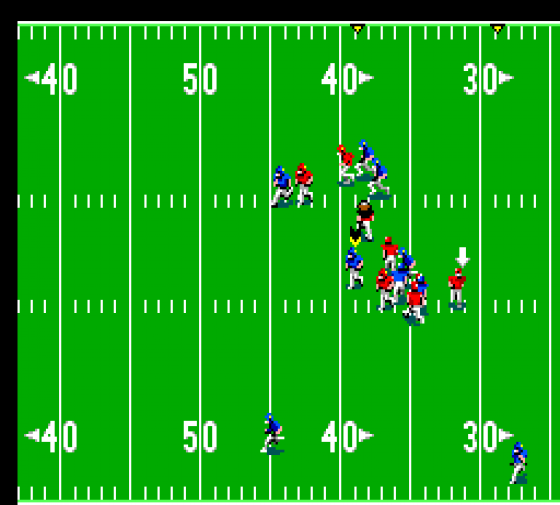 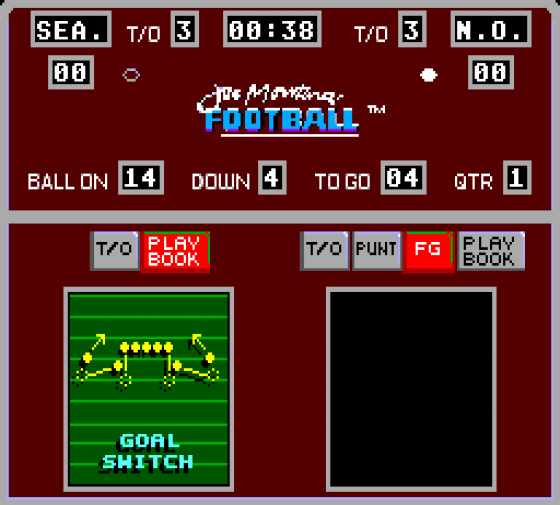