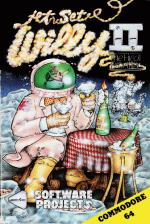 The phenomenally successful series of games starring the manic miner Willy, continues with the release of Jet Set Willy II: The Final Frontier. The game continues in the same house that the original Jet Set game started in.

While Willy has been ill, he has employed some builders to do some work on the stairs. He wonders why they had a green screen, but out of politeness didn't ask them, but what was even stranger is that they added several rather strange rooms to his mansion and refused any offer of payment.

What have these strange beings done to Willy's house and what secret purpose does the rocket room hold in store for the poor, unassuming miner?

Your task is to help Willy tidy up the mess that the aliens have left behind and, of course, explore the new rooms that have been added to the mansion or Maria will throw Willy out on the street.

Those people who have seen or played Jet Set Willy before will, on first sight, think that the game is exactly the same as the original and it is true that they do appear that way. But each room has its new puzzles and unexpected surprises. Plus all the completely new rooms that have been added to the game.

The game is harder than JSW I, a lot harder according to the two programmers, John Darnell and Stephen Birtles, and should keep mining fanatics happy for several months if not years trying to solve this complicated and absorbing game.

Don't listen to the critics who claim that the Jet Set Willy is a copy of its predecessor - it isn't.

Bound to be one of this summer's biggest seller - miss it at your peril!

Bound to be one of this summer's biggest sellers - miss it at your peril!