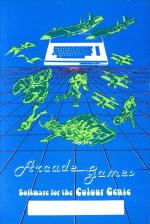 It is very rare to find a decent game for the Colour Genie [Not any more! - Ed] - now you have one right under your nose. As any Spectrum owner will tell you, Jet Set Willy (Same as our version) was a hit. The game was owned by nearly everyone. The graphics on our version are quite brilliant. The author has used quite a lot of inverse characters which make the screens pleasing to look at. The picture in the last issue was nothing really. The amazing colour changing money bags make the game a step up from the rest. The game plays "If I Were A Rich Man" which is quite the object of playing.

You enter each room of a mansion and jump around to collect moneybags. You have to be careful not to fall from too high an altitude. At the same time, you must avoid devils with forks, weeds and spiders which bob on their thread. You can jump over the devils or even shoot them with an arrow, but careful - you only have four.

When all money bags have been collected, the EXIT door keeps changing colour so you know where to go. Even this has been carefully planned to make it attractive. When I saw the prototype at NCGUG I thought it was going to be a bestseller. This version is even better - you can choose which of the 16 rooms you want by pressing CLEAR and BREAK. My overall verdict is that it is the best.

It runs on any Colour Genie.

The best! You can choose which of the 16 rooms you want by pressing CLEAR and BREAK.