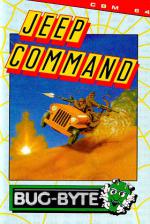 Germany: July 25th 1989, and the Warsaw Pact has just crossed the East/West border. The invasion was a sudden one and NATO didn't have the chance to completely organise their forces. Vital battleplans must be delivered to various parts of the country so things can become organised. Since they're too important to send via radio or telephone (lest the enemy intercept the broadcast) they must be delivered to their destination by jeep despatch. And you, being one of the best drivers in the country, have been ordered to make the delivery. The territory you must cross is unfamiliar to you, but orders are orders...

Jeep Command is a version of the old arcade favourite, Moon Patrol, a one way horizontal scrolling game. The jeep appears on the left hand side of the screen and can be made to accelerate or decelerate by moving the joystick right or left. Pushing up on the joystick makes the jeep jump into the air, the duration and height of the jump determined by the velocity of the jeep.

The route you have to follow takes you across some very rough terrain, including rocky roads, chasms, and caverns. If the jeep comes into contact with any landscape feature, such as a hedge, tree, mole hill, stalactite, chasm, crater or wall, then it explodes, resulting in a loss of one of the five jeeps made available during the game. Fortunately, extra jeeps can be acquired at regular intervals throughout the game.

The jeep's jump facility is the best way of avoiding the landscape features, but there are other, more sinister hazards which come from the air - enemy bombs and grenades. These drop from the sky and bounce about, waiting for you to drive into them. If you're fast enough, you can blast them using the jeep's machine gun. The jeep can fire in two directions, useful for shooting grenades which sometimes come from behind.

There are six different sections of landscape, indicated at the bottom of the screen by a bar graph which increases and changes in colour as you progress through the landscape. Other on-screen information includes a speed indicator (yet another bar graph) and your score.

As you progress through the landscape the going gets tougher. Landscape features pack closer together, requiring very precise jumping to clear them. Hills and scaffolding also make an appearance. The jeep can climb hills with ease, but usually there's some nasty hedge at the bottom waiting to catch an unwary driver. Scaffolding can be used to avoid travelling along the ground, although sometimes even these have impassable hazards - you just have to work out which is the best route to take.

Let's face it, this game is neither original nor graphically magnificent.

What it does have going for it though, is an absolute mountain of playability combined with one of the best soundtracks I've had the pleasure of hearing for a long time. The game doesn't get too frustrating, and thanks to the option of being able to continue a game from where you last died it is possible to get quite a way into the game. If you're a fan of the Moon Patrol style games, then this cheap offering from Bug Byte is well worth getting your hands on.

Jeep Command is simple, unoriginal, graphically retarded, aurally superb, and great fun to play. The backdrops and sprites are average, although they don't offend the eye, and the soundtrack is excellent and suits the pace of the game. For only two quid, Jeep Command represents excellent value for money. It may well be old hat and derivative, but it's highly addictive and very compulsive.

Although the gameplay is out of the ark, I really enjoyed playing this game. OK, so it's a version of Moon Patrol, but it's a very good one and has plenty of original features to stop you getting bored. The graphics are petty poor and the scrolling often judders, but on the whole it doesn't matter when a game is as much fun as this. The sound is pretty good, a really nice little ditty plays throughout the game.

If you've got a couple of quid burning a hole in your pocket then Jeep Command is worth a look.

Graphics 58%
Far from outstanding, but they're not offensive and work well enough.

Sound 93%
A great tune plays its way through the game.

Lastability 77%
Challenging and playable, especially the last level which is a real toughie.

Value For Money 90%
Although it would be a cheek to price it any higher, it's still a good buy.

Overall 82%
A revamped oldie, but a goodie.

Challenging and playable, especially the last level which is a real toughie... A simple concept and enjoyable gameplay gives instant addiction.