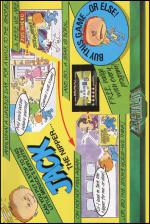 How naughty are you? Naughty enough to smash Mummy's plates? Or put weed killer on Daddy's prize blooms? If so, then you must be related to the 'orridist little kiddywink in the whole of the known universe... Jack - The Nipper.

The implicit charm of Jack The Nipper is that it is almost a complete cartoon, real life people - none of this alien bashing, etc. Perhaps you never had the guts to smash your brother's model aeroplane, but now with Jack The Nipper you can do just that and be as bothersome and awkward as you like.

Jack The Nipper takes the form of an arcade adventure, in which the various rooms are arranged into several streets and houses. Each room contains several objects which must be collected and used in another location or smashed up there and then. The art of naughtiness is to learn which bits of furniture can be leapt on, which objects must be collected, and which objects can be broken. Certain objects must be used in conjunction with others. For example, you will need the weed killer to kill the flowers, the soap powder for the Launderette, and so on.

Normally, the other inhabitants of the Nipperville happily wander around in an unorganised manner with nothing to do but their everyday shopping. However, should you get out your trusty old peashooter and fire a pea at a passerby, then the whole street turns on you and attempts to smack your poor little botty. With all this botty slapping, you gain a rather sore rash, which is measured on a scale at the bottom of the screen.

When the rash level gets too high, you lose one of your five precious lives, so it's best to be very naughty without getting noticed too much!

If you are carrying a key it will give you access to smaller rooms, which can be found in odd places like behind the back of radiators and through walls, which usually lead to separate platform games.

Many entrances or exits are only one way. For example, going through the radiator in the bank will eventually lead back to your bedroom, but you can't go the other way. The town is quite complex, so you will need to map it in order to discover the quickest route between picking up an object and using it.

At the bottom of the screen there is a "naughtyometer" to measure Jack's level of naughtiness. You begin as a 'wimp' and must work your way up through the rankings to 'little horror'. If you're a real wimp - well, you've got no chance!

As much as Jack is cute, naughty and generally all round fun, there isn't much to keep you going after a while of intensive playing, and it won't be long before you've completed the game. The graphics are reasonable, though not up to the normal standard of Gremlin, but the superb music makes up for that.

Unfortunately, Jack The Nipper doesn't really enthuse me greatly, but if you fancy something out of the mainstream of C64 games, then this might be worth checking out.

I like the graphics. I like the music. I don't like the game. Jack The Nipper doesn't appeal to me, and I didn't enjoy playing it. In fact, I found it more enjoyable to watch. That's not to say I wouldn't recommend it, though - If you're after a highly original and playable arcade adventure then look no further!

Jack The Nipper is a cute little game which offers much fun and enjoyment. But for how long? The puzzles are all quite logical and easy to solve, and after you've completed it there isn't much to make you load it up again. There are plenty of nice little touches to the program, like the way you have to collect the Walkman to get the in-game tune going, but really there isn't enough to keep a hardened arcade adventurer going for long. Nice graphics and sound, though.

Graphics 82%
Attractive in every way.

Lastability 69%
The puzzles are straightforward and fun to solve, although a little too easy to crack at times.

Value For Money 68%
Expensive for what it offers.

Overall 75%
A novel approach to an ageing theme.

A novel approach to an ageing theme. The puzzles are straightforward and fun to solve, although a little too easy to crack at times.