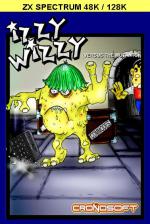 Jonathan Cauldwell not only shares his initials with the son of God, he is a true God of the Spectrum scene himself. He has a softography that would rival that of the big hitters of the 80's (more than 30 games in his back-pocket) and is single-handedly responsible for resurrecting the 16k Spectrum from the rubber graveyard when he released Fun Park, the first commercially available game in 20 years for the machine. Jonathan Cauldwell makes his wares available through the Cronosoft range of Spectrum games and it will be a sad, sad day on Planet Sinclair when he finally decides to hang up his coding mittens.

Izzy Wizzy is the follow up to Jonathan's previous Cronosoft hit, Gloop, and once again see's our hero Izzy taking on the Commodore Fundamentalist Mutants, who are now in the process of building a time machine. The CFM aim to use said machine to return to 1982 and prevent the launch of the ZX Spectrum, thereby ensuring the Commodore 64's dominance of the home computer market and the world itself. Luckily, in the years since Gloop, Izzy has been studying hard and has obtained his bronze certificate in Spell Casting. So his quest is set, travel through the Mutant's stronghold collecting ingredients for his various spells and use them to rid the world of the Commie insurgents once and for all.

The game is Willy-esque in that you travel through rooms climbing platforms and collecting items, however it plays very differently. Exploration is required and the rooms themselves are on the whole quite simple. Magic points are collected that allow you to use the spells that you create to kill Mutants, though you will have to work out for yourselves which spell works on which Mutant. Controlling Izzy is a dream as jumping has been expertly implemented giving you plenty of control over distance and height and the addition of a simple Hi-Lo card game to gain extra magic points breaks things up well. It's a much slower paced game than many of its type though, so won't appeal to all.

The game features a wonderful menu screen with the nazi-like CFM henchmen marching to war. A rolling demo is also provided adding to the wonderful presentation. In-game graphics are a little bit of a let down, though the tanks, C5's and other background scenery are all very well drawn. Music is completely absent and the sound effects are minimal to say the least (reflected in this review by SirClive deducting 5% from the total score - JM), but the overall game is very polished and great fun to play.

Regretably, Cronosoft were unable to provide us with a playable demo of Izzy Wizzy to include on disc. However, the full game is available direct from Cronosoft on cassette for a reasonable price of £2.99 (unfortunately there's currently no downloadable file version).

Wonderful presentation... Graphics are a bit of a let down, though the tanks, C5's and other background scenery are all very well drawn.