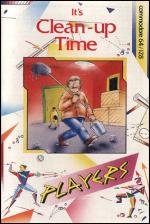 Honestly, you can't do anything these days without someone ruining it. Take the case of the new hotel which has just been built in town; it's all clean and tidy the night before it's supposed to open, then a load of vandals break in and throw rubbish everywhere! What is the manager supposed to do? None of the staff start work until the morning, and everything has to be neat and tidy for when the guests turn up!

In an attempt to remedy the situation, the manager rings the ACME cleaning company and asks them to send two cleaners to repair the damage before dawn. Both guys arrive and prepare to clean up the mess, but neither know what's in store for them...

(It's) Clean Up Time is a one or two player platform game in which the object is to clear eight hotel rooms of rubbish. Each time a screen is cleared, you progress to another, more difficult one. This may sound a simple enough task, but don't bank on it. Throughout the game the naughty vandals rampage around the place lobbing litter, making the cleaning task all the more hectic and involved.

To make matters even worse, the vandals are suffering from some horrendous post-Chernobyl disease - they are all radioactive and touching any of them costs you one of your four lives. Fortunately, the vandals can be killed - by shooting them. Yes, your cleaning man is armed with a fun which can be fired by moving the joystick right or left and pressing the fire button. Each player is also in possession of three smart bombs, detonated by pressing the fire button and moving the joystick down. Doing so destroys everything on the screen.

At the beginning of a game, you have to choose whether one or two players are playing. If two player mode is selected, both players appear on-screen at the same time and must work together to clear the room of rubbish. One player mode is more difficult since you have to do all the work yourself.

The screen is laid out in traditional platform style with ladders connecting four rubbish-strewn floors. A time limit is displayed at the top of the screen, and if a room isn't cleared before the timer reaches zero, you lose life.

There are eight different screens to clean and in between every other level, you're treated to an intermission screen, in which the cleaners flatuate and float around beneath balloons.

(It's) Clean Up Time is a very simple game, and although the eight levels aren't too difficult to complete, I found it fun to play. The graphics, music and presentation are all competent, and somewhat reminiscent of several Taskset productions. For only two quid, Clean Up Time is a fairly sound investment, especially if you like unusual, undemanding platform games.

This nice little platform game is very pretty and has plenty of novel features to bring a smile to the face of any platform freak. The one or two player mode works really well and it's great fun when you start shooting at each other. The only bad point about the game is that it only has eight levels, but then what do you expect for a measly two quid? If you're into platform games then this one's well worth checking out.

I've just about had enough of house, er, flat cleaning, what with strange people tidying my wardrobe. However, this game is such fun - especially with two players. The interludes, which appear every two screens, as a pleasant innovation (if slightly crude at times!) and amusing to watch. The graphics are neat, and the whole game works very well.

Graphics 79%
Very pretty. Nice sprites and great use of colour, but not much variety.

Hookability 81%
Very simple platform action makes the game easy to get into.

Lastability 70%
There are only eight screens, but the two player mode offers plenty of enjoyment.

Value For Money 82%
Lots of fun for a couple of quid.

Overall 75%
One for the discerning platform freak's collection.

Nice sprites... great use of colour... There are only eight screens, but the two player mode offers plenty of enjoyment.