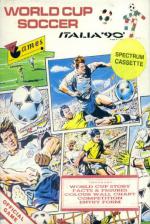 What do you do when you're one of a multitude of companies who possess the rights to produce a footy game based on one of a number of teams, competitions and the like at around World Cup time, and you really want to do well in the sales figures? Don't buy just one licence, get your hands on two of the little blighters!

That's what Virgin have done with this 'un, for, as well as the game being a conversion of the addictive coin-op soccer game, they're also clagging the Italia '90 stick man onto the box too, and calling it World Cup Soccer: Italia '90. Displayed in the now familiar bird's-eye view format, you take control of seven players from one of four countries, and must battle through the rounds to, hopefully, lift that cup and proclaim yourself champion of the footballing world. There isn't a half-time whistle; instead, the game plays right through until the finish, but there's a referee who still does all the things which referees do best - annoy the players by dishing out throw-ins, free kicks and even red cars!

First impressions of World Cup Soccer: Italia '90 were of disappointment - with no half-time break and a reduction in on-screen players it seemed that the game wouldn't be able to compete with other soccer titles on the market.

But after playing for a while, you begin to realise that it isn't supposed to be a simulation at all, but an out-and-out arcade knockabout. As is usually the case with any football game, Italia '90 is more enjoyable when played against a human opponent because, after a relatively short time, you can predict exactly what the computer is going to do.

Graphics are great, with some really well animated players and spectacular behind-the-goal views when you're in a shooting position, and although the control method, which constitutes pressing the fire button to take control of the player nearest the ball, is initially irritating you soon get used to it.

World Cup Soccer: Italia '90 doesn't have Kick Off-like depth of gameplay, but if arcade football is your thing, get your pinkies on this.

Basically the same criticisms as the Amiga version really. The graphics look neat (although static players look decidedly disjointed), and controls are confusing but quickly learnt. Not a bad game if this is the sort of soccer action you're looking for.

Italia '90 doesn't have Kick Off-like depth of gameplay, but if arcade football is your thing, get your pinkies on this.