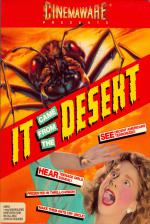 Lizard Breath, California; a small town in the backwater of cultural development - and the current base of geologist, Dr. Greg Bradley. He's cut short his vocation to study the remains of a large meteorite which crashed in the nearby mountains a week ago. Nothing much ever happens in this one-lizard town, so the townfolk are thrilled by it. But their excitement is soon to turn to horror (cue dramatic music)...

You see, the meteorite was extremely radioactive and affected the local wildlife in a literally massive way - the sleepy town of Lizard Breath is about to be attacked by giant ants!

In this tribute to 1950s B-movies, you play the part of Greg, attempting to destroy the ants before they reach the town. Your first problem is that, rather unsurprisingly, no-one believes you - four pieces of solid evidence must be collected (a plastercast of a creature's tracks, a recording of creature sounds, creature fluids, and a creature part) to convince the mayor into calling out the national guard.

But to know where to look for evidence, you'll first have to talk to people about some recent strange occurrences.

You can phone people from your home and most other buildings, or alternatively, visit them at their place of work (although they may be out, usually at the pub!). Travelling is generally done by car. A scrolling map shows all the locations, and the estimated time of arrival for each - you can't afford to waste time as you have only fifteen days to save the town.

Once a location is selected you are automatically transported there. That is, unless you run into the local gang - The Hellcats - who'll challenge you to an extremely dangerous game of 'chicken'. In an arcade sequence, your car speeds towards the Hellraisers, the loser being the car which chickens out and swerves off the road.

On arrival at the chosen location, you are greeted with a static picture and a text window showing your current thoughts. If anyone's there, they'll usually talk to you, sometimes giving you useful information, but beware hoaxers!

One very helpful character is Professor Wells, a scientist at the local university who can analyse any evidence given to him. Other important characters include a female radio DJ, a newspaper reporter, and the police sergeant. However, some of the people are not so friendly and may even challenge you to a knife fight!

A visit to the airfield allows you to survey the town from overhead. The plane is equipped with a limited amount of chemical spray to use on any ants seen. Fuel is also limited and must be carefully watched so that you have enough to get back to the airfield - if not, you can try crash-landing in the desert or on a road. Flying is also necessary to get the recording of creature sounds.

For some of the required evidence, you'll need first-hand contact with the ants - they usually hang out around the mineshafts or volcano craters. A massive ant crawls across the screen - you must aim your gun at it and hopefully destroy it before it attacks. However, if you kill it, the view switches to an overhead one as you are chased by more angry ants! This time you can use grenades against them - kill enough ants and the rest will run away.

If at any time you get injured (by an ant, knife fight, plane crash etc) you'll be sent to the hospital. Any treatment here wastes valuable time, so the usual course of action is to try and escape! In an overhead-view sequence, you must try to get to the ground floor and out of the front door.

If they spot you, the doctors and nurses will chase you and, if they catch you, stick a large hypodermic needle you know where! Luckily, you can hide under desks and in spare beds, and you can even find a wheelchair for extra speed!

Ultimately, to save the town you must find the opening to the nest and destroy the queen. If you haven't achieved this by Day 15, you will have to defend the town from an all-out attack. The mayor will call a general alert - he is finally convinced when one of the ants eats his car! - and will allow you to organise the defences: you can allocate townfolk, construction workers, Soldiers, and police to any location under siege. You can then leave them to it, or go to help in another overhead arcade sequence - here you can enter and control any of the army tanks.

Jet strikes can also be ordered from the general alert map. If you successfully defend the town, you can have another crack at the ants nest; otherwise it's "the end" of Lizard's Breath!

The game comes on three disks so an extra drive is recommended to cut down on the inevitable disk swapping. You also need 1Mb of memory to run the game: unfortunately Cinemaware are not planning a version for the unexpanded A500.

This is the best combination of adventure, strategy, and arcade genres since the classic Rocket Ranger, also from Cinemaware. Some of the arcade sequences are great games in themselves - I particularly liked the hospital scene where you run and hide from the chasing nurses and doctors: zipping around in the wheelchair is hilarious fun!

The adventure itself is superb with a classic B-movie storyline and typically slick Cinemaware presentation to heighten the atmosphere - the giant ants are so well animated, they're scary!

With each new game, the course of events is slightly different and therefore never predictable. Of course, there's the inevitable disk access and shuffling, but it's not too intrusive and all pretty rapid.

I enjoyed Rocket Ranger a lot: there was lots to do with some excellent sub-games to liven things up. This has been repeated in it, but while it is certainly an even more impressive game to look at, I feel it has lost some of the ease of play and fun that made Rocket Ranger such an enjoyable game to play.

The "whatdunnit" aspect of It Came From The Desert makes it a lot more thought-provoking but it lacks instant accessibility as a result. Well, that's my personal moan about it anyway.

This aside, It Came From The Desert is a lavishly put together package with quality throughout the incredible start-up sequence is testament to that. Sonic effects and tunes are of the usual excellent Cinemaware standard; the samples are top quality and even the sub-games are great games in their own right.

A lot of thought has obviously gone into the game structure and as such no two games follow the same path with random events cropping up frequently.

You really do have to work to find the evidence, fight off the ants, and convince the Lizard Breath citizens that the damn things exist! Great stuff... although it's not quite in the Rocket Ranger league.

It Came From The Desert has been hyped for so long now that first impressions are disappointing - there's quite a bit of moving about and the concept lacks the immediate drama of Rocket Ranger. But the more you play, the more interesting the game becomes.

The small "one-lizard" town becomes increasingly familiar, creating a good atmosphere and a real B-movie feel. The sound effects are probably best at this - the radio music sounds exactly like it's been filtered through a cheap radio and the spooky FX when ants are near is excellent, as well as being vitally important.

The structure of the game is adventure/strategy biased, with the finding of clues presenting a formidable task. On the other hand though, Cinemaware have cleverly put in plenty of exciting arcade sequences; the hospital one in particular is technically unexciting, but great fun to play and hard enough to beat, even for an arcade wiz like Robin. All in all, a great game, although not quite good enough to justify a RAM upgrade alone... unless you also plan to get Dungeon Master!

Hookability 90%
Very user-friendly selection system makes it easy to get into the game. Arcade sequences provide light relief from the main adventure.

Lastability 91%
Stopping the ants is a fascinating challenge, and the course of event changes every game.

Overall 90%
Yet another slick Cinemaware release - a pity it's only for the 1Mb Amiga machines though.