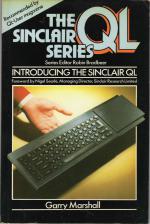 The Sinclair QL Series, published by Hutchinson, covers almost every event possible between a human and the latest machine to come from Sinclair Research (latest in that it is the most recent, not the most behind schedule!). The range is unquestionable extensive, and personally I can't wait for Two Weeks Canal Boating With The Sinclair QL. There could be enough work in the series to keep me getting for years, in the meantime though, Introducing The Sinclair QL seems like a good place to start.

The format of the book can't be criticised. An enlarged table of contents guides the reader to individual subsections within each chapter, and there is an index for specific references, and a glossary to define some of the jargon-details that are too often overlooked by publishers, but which greatly enhance the value of a book.

A look at the contents page reveals that the main features of the QL - the bundled software and Superbasic - make up the greater part of the book. The rest is simply an overview of the QL as it is, and as it could be extended, plus a bit on the keyboard and loading/running programs. Skipping all this, I addressed myself to the subject of word-processing in the chapter 'What is a Word processor?'.

Now of course someone needs to know what a wordprocessor is for before they can use one, but I would have thought that anyone prepared to pay £500 for a computer would already have some idea of what one of its main uses would be. Of the sixteen pages in the chapter, only four dealt with the specifics of using the Quill software, and, disappointingly, I found even these inadequate.

To be fair, the other chapters dealing with the bundled software were more reasonable with the larger part of each chapter given over to instructions on how to use the software (although a fair amount of waffle was also present).

The book is intended for newcomers and experienced users alike - one of those well worn phrases which really means that the book is suitable for no-one specifically. Some of the information in the book is pertinent and useful, but equally, some is just waffle.

Some of the information in the book is pertinent and useful, but equally, some is just waffle.
Create Auction