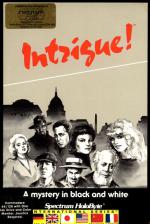 International terrorists are suspected to be behind the threat to spread a mystery virus, codenamed PF13, a crippling offsprint of polio and influenza.

Your job, as a private eye, is to find out who's behind it, locate the source, and defuse the bomb that is set to release the virus. But before you can do this, you must have the key of the hideout, and a diagram to disabled the timing mechanism. And then there's your partner and brother, Joe. He's been kidnapped, and a phonecall warns that you won't see him again, alive, unless you take your people off the case.

There are plenty of suspects, among them FBI Agent Mike Kruger, Ambassador Bahajian, and nurse Diane Hunter, and the various combinations that can go to make up the full solution to the mystery, number over 2,000. So each time you play you get a different game.

After some preliminaries checking out the world news, and satisfying the program that you have the whole package, you start out on the investigation. Almost all input can be carried out by joystick, or arrow keys plus RETURN. A cartoon view of the direction in which you are facing is displayed as a narrow strip across the centre of the screen, and can be rotated. As it moves, available commands are displayed above each feature of the picture, and the relevant detail is shown below. Thus you may be viewing the Bull & Bear Bar, with a choice to ENTER, a monument that is possible to SEARCH, and a path down which you can WALK.

Each movement and selection is accompanied by a few musical notes, which when strung together, go to make up a catchy and addictive tune. By moving around and searching, before long you will come across the PF13 hideout - but it takes more than mere searching to get in.

Talking to other characters can be helpful. After selecting TALK, the disk starts whirring, and a large digitised mug-shot appears on the screen. Below it, are four courses of action to choose from. These tend to guide your actions a little, but don't be fooled by them. They make the game look deceptively easy, which it is not - even when you have chosen the easiest of the three difficulty levels.

If you are chatting to the barmaid, for example, you may perhaps have a choice of buttering her up, asking her about PF13, buying a drink, or smiling at her. Often, a simple action like a smile, will produce more results than something more definite. While you are chatting, do watch the picture on the screen, it reacts in an uncannily lifelife way to your approaches. As the interaction with the character continues, so the options available change, until, usually, your acquaintance terminates the discussion.

As well as being able to choose between playing a male or female role, you can choose to control the game either by arrow keys or joystick. I would recommend that keyboard input is used rather, since moving the option selection highlight prior to selecting, is much more accurate with an arrow key. With the joystick, it is too easy to overshoot. As well as playing solo, the game provides for up to four players to participate, each controlling his or her own 'tec.

The package includes a card for keeping track of suspects, which it recommends is photocopied for continued use. Strange, then, that the game is protected by information within 'The Little Black Book' that is required during play. Well, while photocopying the card, why not copy the book as well?!

Turn the colour down and the sound up, to enjoy 'a mystery in black and white'. Here is a completely novel game system, with a mixture of cartoon style graphics and digitised pictures, plus some catchy music, that has taken over a year to reach the UK. What a shame! I wonder why...

A completely novel game system, with a mixture of cartoon style graphics and digitised pictures.