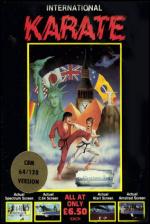 Aaaaiiii! Crack! Ouch! International Karate is another variation on the martial arts theme that gives you the chance to rearrange features, break shins, and generally abuse an opponent to the full.

You take control of a white robed karate bully boy with thirteen different moves at your disposal. Kicks, punches and somersaults are all accessible via the joystick - pushing it in one of the eight directions, either with or without the fire button depressed, results in the execution of a manoeuvre.

There are two playing options, allowing you to fight either a computer opponent or a human one. The single player game has you playing as many 30-second bouts as you can survive, with the objective of beating up and outscoring the computer controlled fighter. Depending on how well a move is executed, a half or full point is awarded and the first person to score two full points is declared the winner. Any time remaining is converted into bonus points. By winning two bouts you are promoted to a higher belt and set against a more intelligent and violent opponent, and a different backdrop (there are four different ones on each side of the cassette). However, if the computer player scores two points, the match and game is over.

If the timer reaches zero before a fighter scores two points then the chap with the highest score for that bout is declared the winner. Between rounds there is a bonus screen which further tests your skills and gives you the opportunity to earn more points. The first is a tile breaking contest where you have to destroy as many tiles as you can with your head, and the second puts your reflexes to the test as you try to dodge the various spears and other deadly objects slung at you by the computer.

The two player game is played over three 90-second bouts. Twelve dots, six red and six white, are displayed at the top of the screen. When one player successfully overcomes the other, one of the loser's dots is turned into the victor's colour. The winner is the first player to turn all twelve dots to their own colour. After three bouts the victor goes on to play a computer opponent.

To be honest, I thought that playing yet another variation on the martial arts theme was going to be something of a chore. I've played, and become wholly bored of Exploding Fist, but I found that playing International Karate was far from dull and I haven't enjoyed myself so much in ages. It's far better than Fist in every way - the graphics are smoother and faster, and make Fist's look crude in comparison. The music is amazing and the sound effects are great - both complement the game well. International Karate is playable and addictive, and the pace is fast and furious. At the price, no self-respecting fan of the genre should overlook it.

Comparisons to Way Of The Exploding Fist are quite frankly unavoidable. International Karate is a bit similar, but it is a damn sight better. The action is very fast indeed and it is more fun to play than its contemporaries. As fighting games go this seems to be the best and at the price anyone into synthetic violence shouldn't miss it. What really surprised me about IK though was the Rob Hubbard sound track. It is really good, much better than all of his recent work. Hopefully this marks a bit of a change. IK is definitely System 3's best product for the C64 to date, and is worth a look at as it's really rather good.

Although this type of game has appeared before, the gameplay has tended to be somewhat flawed, allowing players to demolish top opponents time after time by using the same move. This one is different - the intelligence of the computer player and the speed at which the game is played makes it a lot harder and more challenging to play than any other fighting game. Graphically the game is excellent, with well-animated characters moving speedily across the varied backdrops, which are also very good. All the way through the game an atmospheric and very long Rob Hubbard piece clanks away, and there are also some good sound effects. If you want the best fighting game available and have six and a half quid spare then go out and get this.

Presentation 94%
One or two player options, excellent use of joystick and many 'cute' touches throughout.

Sound 96%
One of Hubbard's best tunes fits the bill perfectly - and there are also some great sound effects.

Hookability 93%
Very playable and easy to get into.

Lastability 90%
The high degree of difficulty makes the game tough to master. The two player option is good fun too.

Value For Money 95%
Great quality at a cheap price.

Overall 91%
The best thump-'em-up we've seen and played yet.

The best thump-'em-up we've seen and played yet.