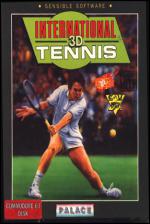 Sensible Software, creators of such classics as Wizball, Parallax and the Shoot-'Em-Up Construction Kit, have been lying dormant for some time, tinkering with new routines and graphic systems. Now they've finished tinkering and here's the result - International 3D Tennis.

Whereas previous games of the genre have relied on a semi-3D, birds-eye view of the court showing two solid players, International 3D Tennis utilises a revolutionary three-dimensional display which can be twisted and turned to access a number of different camera views. The players are vector graphics, and can bend, run across the court and hit the ball with the best of 'em.

At the start of a game there are a variety of options, letting you select one- or two-player matches, which type of court you wish to play on (carpet, clay, grass and cement), choose your skill level (there are four) and set the computer level (there are fifteen). You can also choose to enter a tournament or, best of all, play a season. This is an on-going situation in which you can enter all famous tennis tournaments (and many you might not have heard of) in an attempt to win as much money as possible. The better the cash prizes in a tournament, the better the competitors - get far enough in a pro tournament and you might get to play world famous players!

I've never been a big computer tennis fan - apart from the ages-old Match Point on the Spectrum. Most have been lacking in either presentation or gameplay, or sometimes both. International 3D Tennis on the other hand is a breakthrough, both in tennis simulations and C64 programming in general.

No-one could fail to be impressed by the awesome graphics system - the stick-man players may look basic in static screenshots, but when you see them moving about, hitting the ball and even shaking hands it's real eye-popping stuff.

Another fantastic feature is the stack of different camera views which you're able to access, from vertical and side displays to a long-range shot of the whole centre-court stadium!

Playability, though, is the most important factor of any game, and International 3D Tennis has it in abundance. The amount of control which you possess over shots is staggering - you can spin the ball in a variety of directions, choose whether to serve automatically or manually and, of course, depending on the height and position of incoming balls you can play all of the real tennis moves such as backhands and lobs.

International 3D Tennis may sound complicated and, for a while, it is. But perseverance reaps its own rewards, and once mastered, it offers the best tennis action you're ever likely to experience off court.