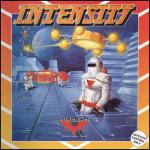 Andrew Braybrook has been very quiet since the much-delayed Morpheus was released at the beginning of this year. He actually finished programming the game last September, and since then has been busily working away on Intensity, his latest game.

Unlike nearly all of Braybrook's previous games, there's no shooting or scrolling, although Intensity does bear many of his hallmarks, including bas-relief graphics, excellent presentation and Paradroid-style sound effects.

So, if there's no scrolling or shooting, what do you have to do? Well, the action is set in the far reaches of the galaxy on a distant space station. Alien forces have invaded, and it's up to the player to rescue the colonists from the occupied sections of the station using a skimmer and remote control drone.

Each screen is viewed from above and represents a part of the space station. The player has the skimmer under his direct control, and there's also a remote control drone parked on the ground. It's moved by pressing the fire button, whereupon it lifts off and moves to the point where the fire button was depressed. Make sure that the skimmer gets out of the way of the drone, though, as they can collide in mid-air, destroying both.

Landscape features vary from screen to screen, but each one has at least two airlocks, from which the colonists emerge, and a landing pad. Colonists attempt to walk towards the drone, but since they only walk in straight lines often get stuck behind an obstacle. This is where the point of the drone movement comes in; and the drone is guided to a suitable place where the colonist may board. When enough people have been picked up, the landing pad flashes, and the drone is guided onto it to finish the screen.

Every time a colonist is rescued, an R appears and floats around the screen. If it's collected by the Skimmer, a resource unit is added to the bank. These can be used to buy faster and more powerful skimmers and drones - although they often take time to build, so order early.

There are five type of alien craft: Spores, Stalkers, Podules, Trackers and Nuclons. Stalkers are the simplest life form, and are destroyed when hit by the skimmer or drone, or when they collide with a landscape feature or one another. If one lands it turns into a Stalker, which is again destroyed when hit by the skimmer or drone. If it runs into a colonist it turns into a Nuclon, which heads towards the drone, downgrading or destroying it on contact. A similar reaction occurs if it hits the skimmer. Podules are formed when a Spore is mutating to a Stalker, and is vulnerable to attack from the drone or Skimmer, and Trackers are dangerous creatures which home in on the skimmer and drone, destroying or downgrading it on contact.

As the game continues, aliens become faster and faster. The mission ends when all skimmers or drones are destroyed, or the final screen is reached, whereupon an escape shuttle is launched from the station.

Although Intensity has a nicely thought out scenario and some neat touches, the gameplay is dull. The game merely consists of moving the drone from one location to another and running the skimmer into aliens, and for me that just isn't exciting. The lack of variety in the gameplay soon gives rise to apathetic feelings, and I found my attention wandering after a couple of sessions: there just isn't enough in the action to keep you playing for a long period of time.

If you're a Braybrook fan, try before you buy: you might find yourself disappointed - I certainly was.

If you're a Braybrook fan, try before you buy: you might find yourself disappointed - I certainly was.