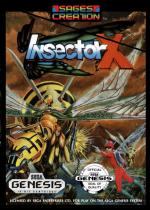 Arrgghhh! Terror! The insects are coming, wreaking havoc and destruction wherever they go - like a hungry plague of huge proportions descending on our fair lands, eating whatever crosses their path! Ooohh!

Conventional insect repellents are useless - these brutes are reinforced with solid steel armour and lethal laser-spitting weaponry. To combat the problem the scientists of the day have put together Insector X, an insect-like robot capable of infiltrating the insect plagues and even collecting some of the invaders' superior weaponry and using it against them. Our robot hero can collect duo-fire cannons, speed-ups, bombs and spinning blades of power - guaranteed to pierce insectoid armour.

At the end of each level of horizontally-scrolling shoot-'em-up havoc, Insector X will come up against the cream of the insect fleet. The first half-screen size enemy fiend you'll come across is a horrifying armoured wasp, armed with lethal lasers and a fire-spitting sting.

That's only the first of your problems should you wish to adopt the mantle of Insector X...

I wasn't really impressed with Insector X to begin with. The backdrops looked rather tedious, the sprites were small and dull, and the gameplay itself felt remarkably dated.

My opinions only changed after I had conquered the magnificent wasp-like end-of-level boss! Both the background graphics and the variety of enemy sprites improve as you progress through the game.

At times the screen is literally full of six-legged nasties, and you're going to need to stock up on your power-ups in order to progress. Lose a life (quite easy to do with the pinpoint accuracy of the collision detection) and you'll have to say goodbye all your weaponry and this makes getting further into the game extremely difficult.

Insector X is pretty good and does present quite a challenge, but if you want a truly amazing shoot-'em-up then you'd be better off buying the brill Thunderforce 3.

Insector X is pretty good and does present quite a challenge, but if you want a truly amazing shoot-'em-up then you'd be better off buying the brill Thunderforce 3.