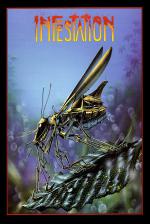 Go to work on an alien egg - with cynanide! 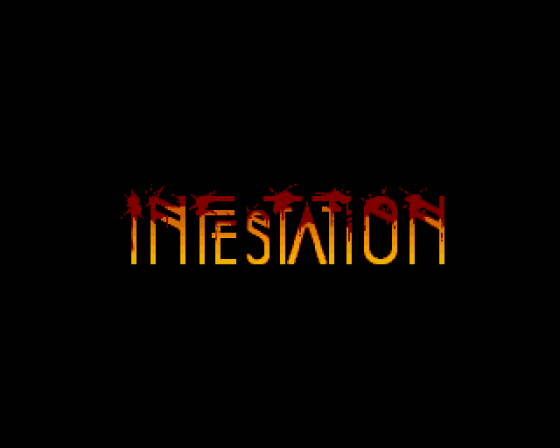 There are some places in the universe that you don't go alone. Acheron is one, Xelos is another. Over four billion light years from Earth, this moon has been colonized so scientists can study CX:D3a - an ice-covered world they suspect has intelligent life lurking below. Contact, it seems, has been made and aliens detected within the Alpha II research colony. The last message from Xelos was a frantic plea for help. Many have been murdered, some by the malfunctioning automatic defence systems, and eggs laid throughout the base...

Kal Solar is the hero selected to 'sanitize' Xelos. He must find the 167 eggs one by one, poisoning them with cyanide gas. Then the station's power source has to be found and rigged to self-destruct, leaving just enough time for Kal to escape to the surface.

Kal's mission is shown in first-person perspective, with you peering through the visor of his spacesuit helmet. Fast and detailed solid 3D graphics are used to show the planet's surface, radar stations, and transporters which take you down into the claustrophobic corridors, rooms and ventilation shafts of the colony. To help you there's plenty of Head-Up-Displays projected on the visor: location/heading display, inventory, life support (heartbeat and food stores), and a scratch pad where you can make notes. There's an avionics HUD, for when you move about using your MMU jetpac, and an atmospheric analysis HUD - you've got limited oxygen, so it's best to take your helmet off when the air is breathable. 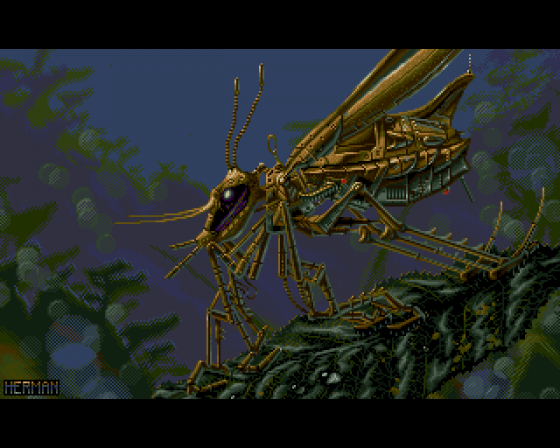 There are two ways of moving about: in recon mode, holding down fire will allow you to look up/down and around while moving. In tactical mode pressing fire shoots your laser gun. To pick up an object you simply walk over it. You can also open/shut doors, use items (such as computers), crouch and even turn off the suit's power via the function keys. There's also an infra-red option - if you can find the device.

Besides the many bugs which roam Xelo's surface and the eggs below, there's lethal sentry droids, welding droids (which travel in the ventilation ducts), radiation-emitting guardians, and a mother alien...

Getting into Infestation isn't at all easy at first. There are an initially daunting array of displays and options to use. But please don't be put off. Perserverance is rewarded by some of the most atmospheric gameplay ever devised, complemented by a huge variety of excellent solid 3D graphics. 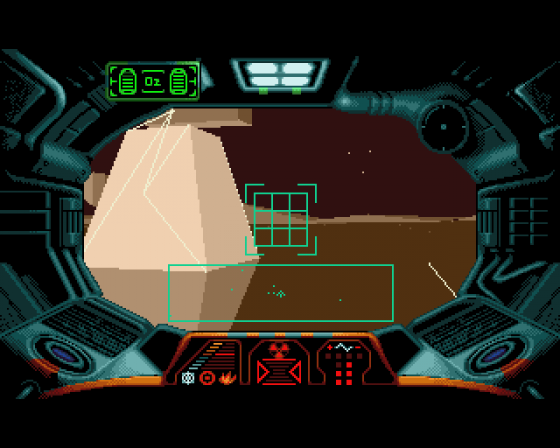 Tension is heightened by the clever 'in-helmet' view and some superb sound - especially the atmospheric breathing effect. There have been many games inspired by the 'Starship Troopers' bughunt tension of Aliens, including the superb C64 Project Firestart and UK Aliens. Apart from the dire Xenophobe, Infestation is the only Amiga game to cover this territory - and it's utterly excellent.

Danny Gallagher's previous 16-bit game was the attractively presented, but ultimately shallow and somewhat repetitive Voyager. So Infestation was approached with a little suspicion, even though the graphics are quite superb. The first problem is getting into the Alpha II base, which is initially rather baffling. Close attention to the manual provided some clues however and the logical solution worked perfectly.

Once you're in the base, exploration and tactical thinking soon prove to be vital. Mapping is essential, but thankfully there are terminals where you can call up the blueprints of the level you're on. Copy these down and all you need to do is to find out where the objects are - and how to use them. My favourite graphics so far are the awesome dropship and the shuttles parked in hangars inside the colony. 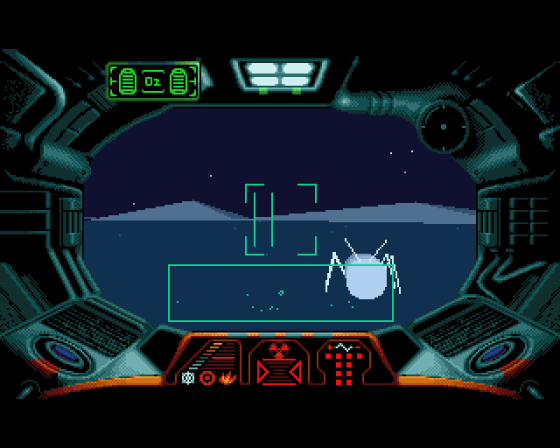 But there's also plenty of thought gone into the gameplay. The way you need to remove your helmet to conserve oxygen, and even shut off the suit power is great. As is the panic when an alien appears, forcing you to arm up. Also good are the HUDs; they're not only attractively presented, but also very useful and realistic.

It's the atmosphere of Infestation that brings it to life with the sensations of fear, doubt and desperation adding to the immensely high tension of the game. Until now I never thought I'd be scared by a computer game but Infestation really did set me worrying (even with the lights on late at night, it's still pretty disturbing to play).

Danny Gallagher has taken the suspense of the Alien movie, multiplied the bug-eyed beasts, up to Aliens standard, and thrown in some excellent puzzles to create one truly 'horrific' product. Wandering the cold, ominously silent corridors is very much in a Damocles vein but then Novagen's game doesn't go all out to scare the player rigid. The idea of exploring the vents is a brilliant touch (even if the vents are graphically very repetitive). 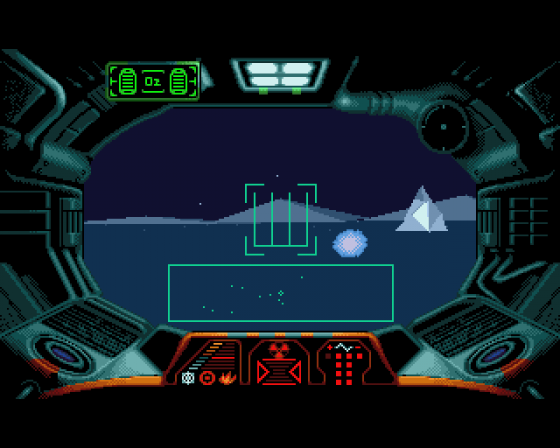 Peeping round corners to look into rooms or opening doors to unexplored regions really gets the old nerves going and the sight of alien eggs undergoing transformation can really see you panic. Having been half frightened to death so far I'm not too sure I want to meet the Mother Alien!

Hookability 93%
A bit hard to get into - but that's part of the appeal, establishing atmosphere and realism with a nice problem to begin with. Excellent underground atmosphere soon leads to compulsive addiction.

Lastability 95%
167 eggs, plus alien queens, a power source to rig for self-destruction and an escape to make mean this isn't going to be completed easily. But the incredible atmosphere will keep you playing until you do. 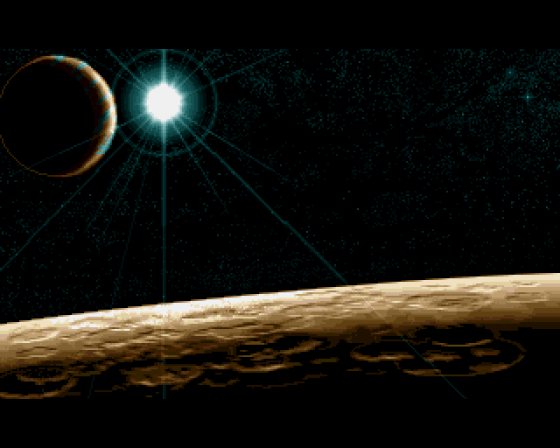 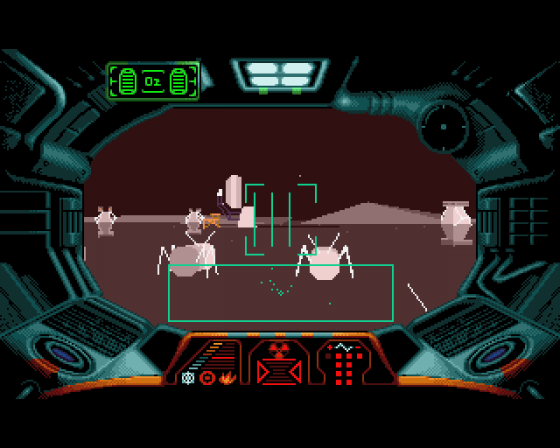