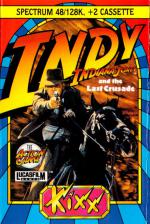 Da da da dah, da da dah, it's Indy again. Sean Connery made a big appearance in the movie but doesn't show his mug at all in this blockbuster game.

For that matter neither does the lovely, lovely, leggy blonde German spy but these faults aside, we have here a fine game with lots of variety, an incredibly accurate Indy main sprite and good, controllable action.

The four game levels take place in mazes that vary from caves to temples and to a Zeppelin. All the graphics look realistic and recreate the movie atmosphere quite accurately. As usual, Indy is on the hunt for lost, ancient artifacts which, as usual, are guarded by tricky booby-traps and raving-mad natives. You also have the added problem of other mindless explorers running around waving guns and trying to shoot you.

On level one. Indy begins in search of The Cross Of Coronado by collecting his famous whip with which He only has a limited amount of uses as shown on the screen before it runs out, and also he must collect burning torches to keep the caves light. After using ropes to jump Tarzan-style across obstacles, including a difficult waterfall, he should be able to locate the Cross and make his escape over the top of the train. Other levels include the creepy catacombs, a huge airship and the final search for the Holy Grail... Indy and the Last Crusade is a good action game. The playability is good and graphics are brilliantly detailed. Unfortunately the sound is very basic and doesn't do the game any justice, but apart from that it's still well worthwhile buy.

Whip crackin' Indy type action that takes you up, down and across with nicely detailed large graphics.

The playability is good and graphics are brilliantly detailed. A good action game.