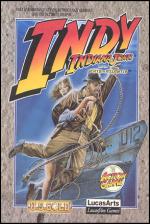 Lost relics, mutter mutter, Nazi thugs, mumble mumble, a complete prat with a cowboy hat glued to his head... Let's face it folks, if you've seen one Steven Spielberg fantasy you've seen 'em all, and never was this more true than with the Indiana Jones saga.

To date the Indy games have been as bad as the films, but with The Fate Of Atlantis destined never to reach the silver screen, the way is cleared for US Gold to release a real cracker... or is it?

It's 1938 (the year Corky was born), and Indy has come across a couple of artifacts: a Minotaur and a bead. This, he believes, is positive proof that the lost continent of Atlantis really existed. Being an Indy film, these bits and pieces are inevitably pinched by a nasty Nazi in search of a wonder-weapon to blow away the Allies in next year's war. (It's amazing what hindsight does to film plots, isn't it? Indy must've been the only Yank who anticipated the war!)

The game begins with Indy and his ever-present sidekick Sophia in a Monte Carlo casino, where they must win enough money to buy weapons and artifacts from a crooked dealer (aren't they all?). Pocketing the dosh isn't too difficult as the roulette tables produce a set sequence of numbers - bet $0 until you've sussed it, then make a serious pile. One romp through a Nazi-controlled naval base later, and it's board that sub and hit Atlantis!

Although the action is spread across a healthy six levels, each one is very similar to the last. The challenge presented by each is pretty straightforward, usually involving finding a set object and putting it in a certain place. Played on a 3D isometric backdrop, you control both Indy and Sophia, toggling between them at will. Each character has a limited amount of energy, depleted by being punched in the mouth, shot at, or just plodding along - Jeez, I know Indy's getting on a bit, but surely he's not that decrepit? Objects are manipulated using a well-thought-out icon system, and if you're not keen on the view you can always change the camera perspective.

The movement system's a bit strange. Whacking the joystick left or right rotates your character Asteroids-style, and pressing 'up' makes him or her take a hike. Blimmin' annoying for the first few plays, but you soon get the hang of it.

Pity the combat system isn't as good. When chased by a Nazi (the green guys who look remarkably like Indy), select a whip or fist icon (better weapons are available later on). If he catches you, you're automatically turned to face him, then knock seven bells out of him by either pulling back on the joystick or hitting the 'use icon' key, it's up to you. There's no skill involved and your enemy soon hits the deck, though not before taking a sizable chunk of your energy. Trouble is he's only stunned! A fallen foe drops life-giving chocolate (!), but stop to pick it up and the Nazi recovers and beats you up again, so you lose the energy you just gained! So whaddayado? High-tail it outta here! Alas, that won't do you much good either, as he *always* recovers quick enough to give chase.

The graphics are functional, but far from dazzling - each level is fleshed out in various shades of monochrome, making the green characters look like the Incredible Hulk. The animation's not much to write home about either: again functional, but definitely unspectacular.

There's something about Indiana Jones And The Fate of Atlantis that makes you think you're in for a really great action adventure. It's got that indefinable something that makes you think it's your fault when this fails to emerge - it isn't! Indy is a very dated collect-'em-up with very little to collect, and a hopelessly under-exploited puzzle element thrown in for bad measure. Not a mega-disaster like Temple Of Doom, but not recommended either.

"But we named the dog Indiana" (to quote a very famous white-haired Scots actor), and for the latest Indiana Jones game this is very apt. Indiana Jones And The Fate Of Atlantis looks to me like one of the little messages Indy the dog dropped. The big question on my mind is why are Indy and various other characters green? Perhaps Indy lost all his cash in the Casino and is feeling a bit Uncle Dick.

The intro sequence is very impressive, though. Indeed, on the strength of it, I assumed this would be an excellent game (and monkeys might fly outta my butt).

To be fair, there's a decent game in there somewhere; it's just that someone didn't provide a big enough shovel to dig it out. Okay, you might be the type of person who enjoys this "wander around and search every nook and cranny" style game. Personally, it bores me silly, especially as the action is as fast as my Granny on her Zimmer frame.

Nice intro, icky graphics and confused gameplay, what more can I say?

Hookability 56%
Takes a while to get used to the controls...

Lastability 51%
...by which time you'll find there's hardly any gameplay!

Bores me silly with action as fast as my Granny on her Zimmer frame... A nice intro, icky graphics and confused gameplay.