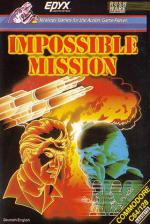 First released way back in 1983, Impossible Mission hurls the player into a world of espionage, deadly robots, nuclear blackmail and a warped madman.

The plot concerns Elvin, a one-time college student whose mind was warped after a freak accident with a video game. Eventually becoming a Professor of computing and robotics, he suddenly disappeared and remained unheard of... until now.

Security breaches into key military computers have been traced to an underground silo, where Elvin and his enormous super-computer are thought to reside. Military experts reckon that Elvin is capable of cracking the secret US missile launch codes in six hours time, giving him the ability to destroy the entire world. The only way the situation can be reversed is if a single person enters Elvin's silo and shuts down the computer, and there's only one person capable of completing this task, you - Special Agent 4125. No weapons can be taken on the mission, as Elvin's security scanners would spot them a mile off - the only thing that can be smuggled through is a pocket computer...

The screen is split in two, with the upper section containing a side-on view of the ensuing action, and the pocket computer control panel occupying the bottom third.

The mission begins at the liftshaft which leads to Elvin's lair. Pulling on the joystick causes the lift to speed downwards, automatically stopping at the first floor it reaches. Agent 4125 can then turn either left or right to enter a room, with either choice revealing a series of gantries and catwalks interconnected by lifts. The catwalks contain pieces of furniture and machinery, some of which conceal passwords to the secret files contained in Elvin's central computer. Furniture can be searched by standing in front of it and pushing up on the joystick. As the Agent searches, a box appears containing a shrinking horizontal bar. A discovered password is displayed when the bar reaches zero - otherwise the words 'Nothing Here' appear.

Robots of varying intelligence patrol the catwalks - some remain motionless until disturbed, some wander around on a preset course, and others engage in relentless pursuit. Agent 4125 is stunned by contact with a robot or its deadly electrical discharge, and ten minutes of mission time are wasted as he recovers from the shock. Bubble-like robots track every move made by the hero, and some rooms contain dangerous holes in the floor - once again, ten minutes are wasted if 4125 falls foul of these hazards.

One computer terminal in every room can be logged-onto using the search technique. When this is accessed, the screen displays three options: Reset Lifts, Disable Robots or Log-Off. The player has to find the relevant passwords to activate the two former commands.

The pocket computer usually displays a map of the silo which is built up as its rooms are explored. However, standing in a corridor and pressing the fire button changes the display to that of the game timer, activating a password assembly area in the process. The timer reads 12 o' clock at the start of the mission and immediately begins to tick towards six, the time when Elvin will launch the missiles. The passwords are displayed in a memory window and can be picked up and assembled in the centre of the control panel. When all the passwords have been assembled, the control room can be stormed and the computer shut down. Fail to do this, and Elvin will wreak his bitter revenge...

I haven't enjoyed myself so much in ages - it just goes to show how far ahead of its time this was. The graphics and sound are still state-of-the-art - they're so much more than cosmetic, as bth aspects create an exceptional atmosphere.

Everything about Impossible Mission is exquisite. Epyx should seriously consider a sequel - although to be fair, they'd have trouble topping this classic creation. If you missed Impossible Mission the first time around, don't miss the chance now.

This was one of the first games I bought as a Commodore owner, and it's just as playable now as it was then. The first thing to grab me was the animation: it's still superb - you'll recognise the style if you have seen any of the Epyx sport simulations.

The speech is also incredibly good, with five different sections, including a blood-curling scream when your agent falls to his death. There are loads of rooms to explore, and the puzzle section is very entertaining in its own right.

The program reeks of professionalism and is damn near flawless. Someday, all games will be made this way.

You're looking at one of the greatest programs ever written. The graphics, animation, sound, speech and gameplay combine perfectly to create a fabulous atmosphere - the feeling of "being there" is complete.

The different robot characteristics are brilliant - sometimes a seemingly stupid one turns around and gives chase at high speed, and at other times you spend ages creeping up behind one, just to find it's completely dead.

There is an amazing amount of detail to be found in the furniture - right down to the toilet roll next to the lavatory and the microwave on the kitchen unit. It's brilliant playing this again, and it just goes to show that they really don't make 'em like they used to.

Graphics 92%
Not overly varied, but amazing attention to detail and effective use of colour.

Lastability 94%
High lasting appeal - 32 rooms to explore and 36 pieces of puzzle to find and solve. Always worth another look.

Overall 95%
A timeless classic which has lost very little since its release nearly three years ago.

A timeless classic with brilliant, atmospheric, spot FX and speech.