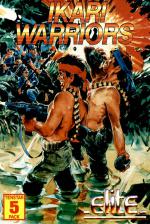 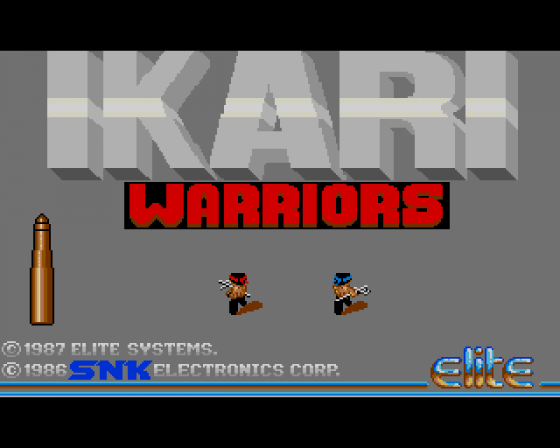 A dynamic duo of crack commandos have received a desperate mayday plea from a commander of the US forces, who has been captured by a vicious 'n nasty group of revolutionaries. Unfortunately, their plane crashes before reaching its intended destination (perhaps our hasty heroes should have remembered to take a pilot with them), leaving miles of hostile, soldier-infested jungle between them and General Bonn. The only available course of action is to hack a path through the undergrowth.

You and a friend take up the story in simultaneous two-player shoot-'em-up action (wild-eyed loners are catered for by a one-man frenzied fire 'n fight option). The vertically-scrolling jungle scenes reveal enemy bunkers, bridges, forts and gun emplacements amongst the natural features of rivers, sandbanks and various types of foilage - jam-packed with guerilla soldiers, tanks and helicopters.

Foot soldiers can be killed with a single bullet but hostile vehicles and outposts need to be tackled by grenade. Both types of ammunition are limited. Luckily, destroying gun emplacements or red soldiers leaves a flashing icon, which can provide extra supplies and firepower and bonus lives or fuel. 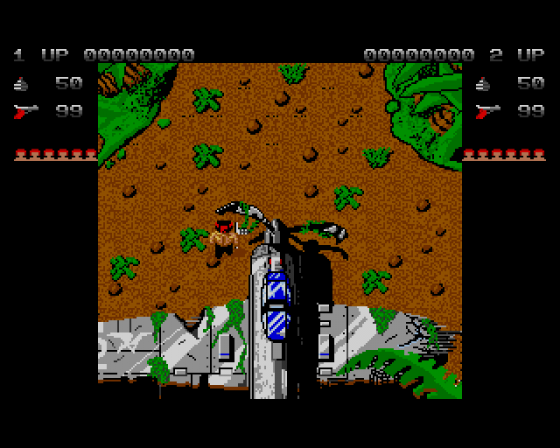 Fuel prolongs the life of empty tanks boarded by the warrior. They are easily identifiable by the word 'IN' on their turret (apparently big flashing neon signs are the height of fashion for the tank-about-jungle this summer). Once aboard, you are impervious to bullets but a grenade or enemy shell will irreparably damage your tank (a plume of snoke emerges from the turret). You only have a few seconds to bail out before you're blown into small, gristly pieces.

Death! Murder! Maim! Kill! Disfigure! (Excuse me while I psyche myself up for this critique). Uuuwwyyaaghh!! (That's better.) As you can tell, it takes a lot to rouse the homicidal maniac in me, and Ikari Warriors comes reasonably close to achieving that. 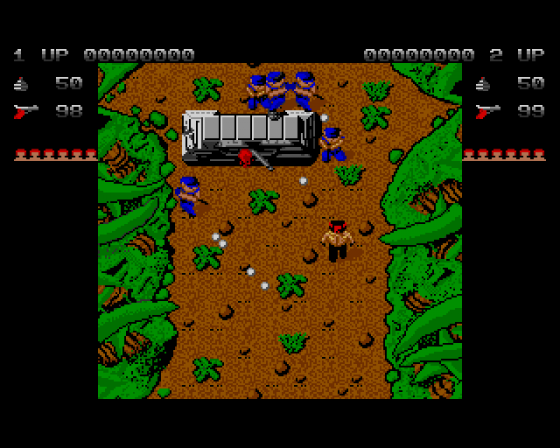 The machine-gunning action has a definite bloody appeal and, as usual, two-player action boosts the playability no end. It's fortunate that gameplay is so strong, in fact, as the graphics are rather too jolly to create the necessary air of menace, and the military soundtrack isn't really very rousing.

Still, fans of the arcade game should be well pleased to hear that the joystick control benefits greatly from the absence of the coin-op's unwieldy twist joystick.

At this price, I would hardly call Ikari Warriors an essential purchase, but it has much to offer hardened arcadesters.

You might think that a version of Ikari Warriors released six months after the C64 version (itself already a year late) would be not worth much attention. However, if you liked the arcade version, and can consider shelling out £25 for an almost identical copy, this is for you.

The audio effects aren't all that good, but the graphics are spot on, and the action fast and furious. Without putting too fine a point on it, this is almost like having the arcade game on your own computer.

The difficulty level is set perfectly, so that you just progress enough to want to have another go. It's not the best game on the Amiga, nor does it fully justify its high price tag, but if you're looking for some simple "Commando-style" maiming, buy it.

Ever since I saw Ikari Warriors in the arcades, I hoped someone would release a home version. My hopes were raised when Elite announced that they were due to release a C64 version back in November 1986, a little while before the game actually appeared (snigger!) to an enthusiastic reception.

Now we have the Amiga conversion, with its improved graphics and sound - and thankfully the enjoyable gameplay has been retained. The graphics are very good, perfectly capturing the feel of the coin-op original.

The difficulty is set just about right, allowing you to progress a little further with each game, so that your interest is maintained over a long period of time. Ikari Warriors is an excellent arcade conversion and a cracking game in its own right.

Presentation 77%
Standard arcade options with the addition of pause and restart facilities.

Graphics 75%
Accurate reproductions of the arcade original's, so they do look slightly dated.

Sound 69%
Competently programmed but unfortunately it only mimics the repetitive coin-op tunes.

Hookability 85%
The mixture of jungle running and tank driving is difficult but enjoyable to play.

Lastability 71%
Exploration of ever-deeper parts of the jungle is brilliantly addictive.

Overall 74%
An accurate conversion of an old but playable Commando variant, but a high price to pay.

An accurate conversion of an old but playable Commando variant. 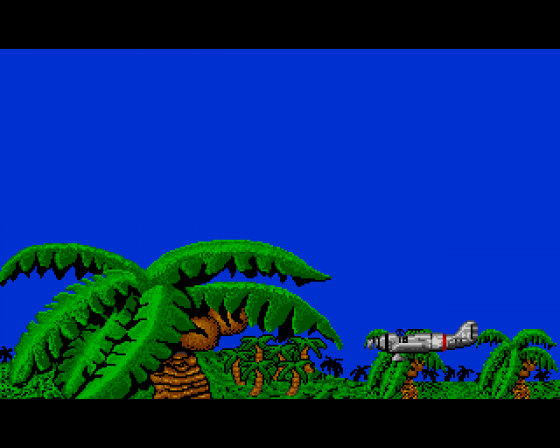