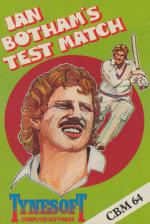 Being the season, it isn't unreasonable to expect some cricket simulations, and indeed there are two this month, both endorsed by famous names.

Ian Botham's Test Match offers various length games to 2 players only, controlling either the home side or the visiting team. The three games available consist of Limited (sixteen 6 ball overs), One Day (thirty two 6 ball overs) or Test Match (unlimited overs, 2 innings per player). The computer provides an 'armchair team', but there is an option to select and name your own team players to make up your side. Unlike Graham Gooch's Test Cricket, the bowling player may set the field (except for the wicket keeper and bowler of course). This allows for the type of bowling you intend to use and takes account of the batsmen's styles. Once placed, the fielder must remain where he is until the end of the over.

Bowling comes in four styles, fast, medium, bouncer and spin, and these are selected before each over for all six balls, although you can change your mind if you wish, with a reduced chance of success of getting a wicket. The four directions of the joystick determine which of the four types of ball you will bowl. Having selected a type of ball, the bowler is activated by pressing fire and the computer takes over.

As soon as the bowler has delivered a ball, a red cursor appears on screen below the bowler's wicket. This can be moved to a fielder, and pressing fire will put that fielder under joystick control so that the player can attempt to stop the ball resulting from the batsman's stroke. To actually collect the ball, the fire button must be pressed at the exact moment the ball and fielder 'collide'.

Batting allows for several types of stroke, again by the direction of joystick movement combined with timing of pressing fire. Once fire is pressed, the stroke will be taken and you cannot change your mind, but there is a short space after the bowler delivers for the batsman to assess the stroke to be played. A run is taken by pressing fire after the hit, and each run taken requires a successive press of the fire button when the batsmen reach the crease or by holding it pressed all the while.

The standard means of getting a batsman out are employed, ie bowled, caught, run out, caught behind, stumped, or LBW.

Between overs the screen cuts to the scoreboard and then allows reselection of fielder placing and bowling type.

Oh, dear! What's gone wrong? The graphics are a bit wobbly with the little stick men standing statically around the pitch. The bowler looks like an epileptic, and the batsman is about as mobile as the stumps. Gameplay is so finicky that it completely ruins the game; bowling is made hard by the high-speed cursor, and the timing on the batting is so tight that it's ridiculous. The gameplay overall is slow and it's just not as good as the other two cricket competitors, Tim Love's and Graham Gooch's cricket. Sound is rather minimal too, with the crowd sounding like a lavvy's just been flushed and few clicks and clocks. I think Ian Botham's better off on grass than he is on screen.

Another cricket game to be released this month, and it is a sort of a cross between Tim Love's and Graham Gooch's, only worse than the two of them. There are some nice attempts at some new play features that don't really work, as the players are too small. For one, I like the touch with the duck when a player is out for no score. I also like the OWZAT! bit with OWZAT! printed in dirty great letters, with a cricket ball for an 'O' and a member of the crowd jumping up with excitement. One of the better tries at a cricket game that has failed rather badly, mainly due to over awkward control and poor on-screen presentation.

It's inevitable that comparisons will be drawn between this and Graham Gooch's Test Cricket. For a start off it is one pound more to buy... The main difference in the game is visual; here the whole field as well as the pitch is shown, which means the characters are much smaller. They are also even blockier and the animation is very limited, resulting in an unsatisfactory feeling from the game. It does offer more control of the various players, especially in the fielding department, but this is negated by how finicky it all is and is not helped by the cramped graphics resulting from fitting in the whole field on screen. The crowds beyond the boundary are merely small circular shapes that sort of flicker and change colour when they applaud - very unconvincing, it might have been better to ignore them altogether. The sound is okay, usual bonks from bat and ball, a sudden, unconvincing rush of applause that fades quite realistically, however, and a strident little tune between overs. I didn't find the game particularly enjoyable, and the price drawback makes it a poorer buy than GGTC, and I think the really serious drawback is that you do have to have two players, each with their own joystick.

Presentation 78%
Some detailed instructions but poor to look at and difficult controls.

Sound 31%
Not a lot to have in cricket but there are a couple of bits of 'music'.

Hookability 42%
Very finicky to play and get into.

Lastability 36%
Fans of the game will probably find it boring.

Value For Money 30%
Overpriced for what it offers.

Small and indistinct graphics and overpriced for what it offers... Fans of the game will probably find it boring.