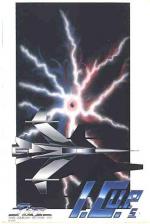 ICUPS - international Commission for Universal Problem Solving - has got rid of the infamous Charlemagne Fortheringham Grunes, and has got another sucker to do its dirty work - yup, it's you.

Very different from the slick graphics of Nodes and Arc of Yesod, ICUPS is really two games in one, both shoot 'em ups - their only link being the rather tenuous storyline.

The first half is a straight 'Blast-everything-that-moves' as you fly up a seemingly never ending tunnel, beset on all sides by alien aircraft. These are colour coded and it'll take you no time to learn what does what and how it does it: yellow craft are indestructible and lethal on contact, green shoot down on you, blue fire up at you etc. Beware the ones that shunt you sideways into electrified walls where instant death awaits. It's pretty simple both graphically and visually reminding me vaguely of Imagine's now historical Arcadia. You get a bird's eye view of the tunnel with you flying up the screen and the aliens flying down. One word of warning: if you slow too much and hover at the bottom of the screen, yellow nasties tend to fly up from behind and zap you.

What saves the first part of the game is the difficulty factor. Some experienced zappers will, I'm sure, complete it almost immediately. But if you've got two left hands, like me, you'll find it a tricky job to get through all three tunnel sections unscathed.

Eventually I got there, and entered the space ship and the second half of the game. You've got to find four parts of a bomb and this time you control a sort of flying pig - described as a DEEN Mk II robot on the cassette inlay. It's even got a jet pack on its back and bounds around the maze avoiding robopods and hopping faces. The space ship is planned out in corridors with exits leading up and down. Very confusing as all the corridors look alike and it might be a good move to map this one out. The pig's got five lives and each ends when its energy, which drains away each time it comes into contact with a pod, falls to zero.

There's nothing spectacular about either of the two parts of the game. The graphics are very average and the gameplay is old hat. Embarrassing to admit then that I rather enjoyed it and I didn't want to stop playing.

Two games in one. Incredibly unoriginal joystick-destroying stuff but quite addictive for all that.

Two games in one. Incredibly unoriginal joystick-destroying stuff but quite addictive for all that.