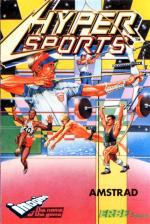 Just when you thought your waggling arm was about to waste away it's arrived - Hyper Sports - and is guaranteed to give the old muscles overtime. Six events of skill, timing and good old fashioned, stick bashing will really put you through your paces and probably eclipse Daley Thompson, Brian Jacks and Geoff Capes in the process.

The six events are swimming, skeet shooting, gymnastics, archery, triple jump and weightlifting. There are three events on each side of the tape and although this isn't many for a game they all demand excellence in one form or another. The game starts with you inputting your initials so that high scores for each event can be displayed as your own world records. Then it's straight into the nitty-gritty.

Swimming first, and a test of rhythm and reactions over two lengths of a 50 metre pool. Three other competitors line up on the left of the screen with you and, as the gun goes, they all hit the water heading for the right of the screen. Each lane scrolls separately with your man in lane three. He is propelled along by waggling, but in order to last the whole race at good speed, this has to be done at a relaxed pace. Exactly the right waggling speed is found by experience and this is only interrupted by the occasional sudden stab for the fire button as the swimmer gasps for air. Waggle too vigorously and the swimmer may slow to a snail's pace. Mistime your breaths and he'll be left spluttering in the water. There is a qualifying time for the event and every time you defeat it, it gets a bit lower.

Skeet shooting is a matter of timing and fast reactions in order to shoot all of the clay pigeons that zip across screen. A man with a gun stands at the bottom of the screen while clay pigeons fly in ones and twos from the left. Two small black rectangles home in on the clays, one slightly to your left, the other to the right. When one of these is over a clay the gun has to be moved in the correct direction and fired to destroy it. There are three lots of pigeons so that you've got three cracks at getting a qualifying score. All this happens very fast and calls for great reflexes and a good shooting rhythm. As with all the events, there is a qualifying score which gets gradually harder as you get better.

The gymnastics is a leap over a vaulting horse and combines timing with a waggle. The gymnast turns up to the horse automatically and you have to time his leap off the springboard into the air. Then you have to hammer for dear life to rotate the man in the air before trying to land on your feet on the other side. The timing and waggling are probably the hardest of the six events to get the hang of and this one may become a source of frustration. Once again you get three goes at it but you'll probably need many more.

A change of pace on side two with two more peaceful events before you go into the real muscle-sapper. Archery is similar to the same event on BJ's Superstar Challenge with a target moving down the screen and you deciding the wind speed, elevation and release to try to hit it. Three sets of arrows are available to get the familiar increasing qualifying score.

The triple jump also keeps you away from waggling as the man approaches the sandpit under his own steam and you are left to set the angles for the three stages of the jump. These have to be as near to 45 degrees as possible to get the maximum possible distance.

The last event is weight-lifting and will probably make even your fingernails sweat as you try to lift progressively heavier weights. The divisions go from flyweight to super heavy with the difference being how long and hard you have to waggle to get the weight in the air. This is done against a time limit and you have to satisfy three judges before you succeed with the lift. Three goes again and you'll be ready for a rest at the end of them.

Graphically the most impressive of the events is the swimming with the skeet shooting looking good as well. The sound effects throughout are very "arcade-ish" although there are no long tunes, just little bursts of jingles. The gameplay is excellent on all six events, providing several different types of challenge that should keep you at it for weeks.

P. Six gruelling events.
P. Attractive graphics and animation.
P. Many different skills required as well as good waggling.
P. Increasing difficulty in the qualifying scores.
P. You won't be able just to keep going around, as in DT's Decathlon.
P. Worth the wait.

N. Events have to be played in two lots of three.
N. May be too demanding for some bodies.

Yes, it may be "too demanding for some bodies" - mine was one. I was physically and emotionally drained at the end of this contest and I fear I may have permanently damaged my joystick hand. Not to mention the joystick. But there's more to this than gratuitous waggling - you need to use your brain as much as your brawn. The gymnastics in particular require a lot of skill if you don't want to end up banging your head on the floor in frustration.

This is the fourth notable waggling game on the Amstrad - the others being Daley Thompson's Decathlon, Brian Jacks Superstar Challenge and Geoff Capes Strongman (reviewed in this issue). So how do they match up to this latest sweat-bringer?

DTs and BJ's have more events but both lose out on some other points. DTs events tend to be very similar with straightforward waggling for running and a fire button for setting angles in the throwing events. Hyper Sports has much more variety in both the events and the skills required to complete them.

Brian Jacks' also has the variety of events and skills but unfortunately loses out on the gameplay side in events like the arm dips, squat thrusts and football. Hyper Sports also has slicker graphics and gameplay with a sense of humour thrown in when the gymnast bounces on his head, the swimmer gasps for air and the skeet shooter winks at you.

Geoff Capes also loses out because the events have less skill applied to them and tend not to produce the same urgency and excitement. For my money, Hyper Sports is the best yet and will really put the player and their joystick through their paces.

The gameplay is excellent on all six events, providing several different types of challenge that should keep you at it for weeks.