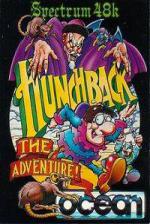 As you might expect from a firm like OCEAN this is a step above the usual adventure game in terms of presentation. In many other respects, however, it is pretty run-of-the-mill stuff with the usual blend of objects and problems to be tied up together (although the first part of this three part adventure has more objects than problems). The game follows in the footsteps of its arcade namesakes, but this offering has more in common with Never Ending Story, what with its 'events' window on the left of the picture and up to six objects displayed on the right. These are laid on top of a tableaux depicting Notre Dame cathedral and can go as far as cartoon-like Biffs and Bops emanating from the scene where you, the hunchback, take on one of the many guards. As with Never Ending Story, I think the trendy display and atmospheric redesigned character set go a long way in compensating for any flat-footedness in plot.

In short Quasimodo has to find and rescue Esmerelda. This entails completing the three parts in the correct order. Firstly hunchback must escape from the cathedral set in the heart of Paris, made famous by the Victor Hugo novel of 1831. This involves side-stepping or disposing of the guards sent to harass you by the evil cardinal and his spineless lackey the Bishop of Notre Dame. If you survive that ordeal you then make your way under the city of Paris until you reach the cardinal's mansion. Finally you challenge the Cardinal and rescue your sweetheart Esmerelda.

Not only is the game itself polished but the instructions on the cassette inlay are truly superb. The story-telling and gamesplay is related in a much more professional way than is often the case with adventures, and useful details like acceptable verbs are included making it easier to make a proper attempt at the game.

Not all gamesplay is sweetness and light though; the silent key entry is error prone. This is in some way countered by the DELETE not needing the CAPS SHIFT depression, but not entirely. Another irritant is the lack of an EXAMINE command without which much of the interaction with the adventure is lost.

By the far the greatest offering Hunchback has as an adventure is its humour. Take these two location descriptions in the first part: 'Standing in the front aisle you can see to the east the altar and to the west the centre aisle which is pretty impressive considering you have only got one eye' and 'You find yourself in a bedroom that is decorated in early gothic tack. The wallpaper is garish and clashes with the duvet, and the fluffy slippers are just too passe!... Lying on the ground is a strange tattered book entitled Evil Worshipping for Beginners'. Even the Inventory list, which complements the picture tokens above, shows some good turns as in 'An old music book entitled Bell Ringing for the Deaf' and how about Zen and the Art of Guillotine Maintenance, a book which no doubt predates the one all about flowers and motorbikes and how to link them by going loopy.

Hunchback the Adventure is an attractive, stylised adventure with much humour and a great amount to play, what with it coming in three parts. It won't enthral adventure freaks but it will keep many a novice chuckling before they get the hump.

This won't enthral adventure freaks but it will keep many a novice chuckling before they get the hump.