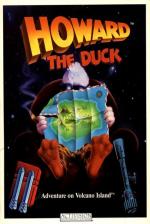 Howard is an extra-terrestrial duck who has been mysteriously spirited to Earth. He looks a bit odd, but is an amicable fellow with two friends, Beverly and Phil. Beverly and Phil are good sorts too, but they have just been kidnapped by the Dark Overlord, who has taken them to his abode on Volcano Island. Howard is a mite peeved at this, and so he sets out on a rescue mission. But what he doesn't know is that the Overlord is expecting this sort of reaction, and has set traps so he can capture the feathered hero and turn him into duck soup.

To begin with, the player's name must be typed in and the level of play selected from the four provided: novice, intermediate, advanced and expert. The levels differ in the number of lives granted, the aggressiveness of the enemy and the length of the game - on beginner level you only have to get to the volcano to save your friends, whereas on the advanced level there's a lot more to do before the mission is completed. When the options have been chosen, the adventure can begin.

The screen displays a view of the island and Howard automatically parachutes down from the skies onto a pathway. The joystick is used to move Howard around, and he can go anywhere as long as the landscape allows, scrolling the scenery as he goes. The fire button makes him jump, kick and punch, the action depending on the situation he's in.

The first part of the mission follows Howard's heroic journey across the island. First he has to find his back-pack which dropped off during the parachute drop. He then has to make his way around the island to a volcano, home of the Overlord. Throughout the journey hazards are encountered: mutant slime has to be jumped over, and mini-mutants pop up from mole-hills and try to capture Howard. Mutants can be dispatched with swift, well aimed kicks, and jumping on the molehills stops mutants emerging.

If Howard manages to reach the foot of the volcano, he is automatically strapped in to his microlite and has to fly over the mouth of the volcano and parachute in. His flight is made hazardous by the crosswinds which affect the craft's course.

The penultimate section involves a dangerous run through a crumbling cave where fallling stalagtites and holes in the floor impede the duck's progress. After traversing the cave, Howard meets the Overlord in a final, deadly confrontation. The evil kidnapper must be shot three times with a neutralizer pistol, whereupon he dies. The volcano must then be shut down by pulling on the lever which sits behind him.

A tricky task - and just to make things worse it has to be completed in thirty minutes...

There's only one good thing about the game - and that's Howard's superb animation. Otherwise, this is an extremely dull exploration game. The fighting is very tedious, but more annoying is the fact that Howard can't walk 'behind' trees - he has to walk around them.

It's also slow to play, even on higher skill levels, and I became incredibly frustrated when I couldn't shake loose a gang of mutants - you don't get a chance.

Controlling the microlite in the second stage is also very frustrating, and so is traversing the cave in the volcano.

Overall, Howard The Duck looks pretty but it's incredibly dull and frustrating to play.

This is very good visually and aurally, and the initial impressions generated are quite good. Once it's played through, you soon realise that apple has a rotten core.

The gameplay is limited, slow and very frustrating with four very limited stages to complete, and none of them are anything to thrill. The whole package is a complete waste of time. Where's the old magic, Activision?

I found Howard The Duck quite absorbing - for ten minutes anyway. The pace is far too slow, and fighting mutants is tedious with such a limited number of moves available.

Flying the microlite is incredibly frustrating, and after playing for an hour or so I came away feeling irritated, disgusted and somewhat cheated by the whole thing.

Why this is multi-load I don't know - there's just so little to it. Activision ought to give up producing poor quality licensed games and continue from where they left off... writing original, quality products like Park Patrol.

Sound 76%
A good tune plays when you complete the mission and most of spot effects are neat.

Hookability 37%
Initial quite appealing, but not very addictive.

Value For Money 9%
Severely overpriced for such a limited game.

Overall 19%
Another licensing disaster which should be avoided.

Quite absorbing... for about ten minutes! The pace is far too slow, and fighting mutants is tedious with such a limited number of moves available.