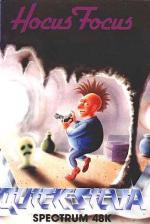 This is Binary Design's first that I have seen and it's all about Jeremy the 'Glowing' punk reporter. The basic idea is that the paper you work for, called the "Shocker", hasn't had a great story for weeks, so when the Ed hears about a nutty Professor's inventions, he sends Jeremy out.

Simple? Oh no, because the Professor has created some mutants which try their best to hinder your quest by pinching your film. This means you have to go back to the darkroom, reload your camera and start again. But, you don't seem to be told when your films have gone - so it makes it a bit harder.

The graphics in this game made by eyes pop out. Good? No, terrible. The punk looks more like a mutant than the mutants do.

Overall this game is not what I expected - it looks like something that was written in 1982 rather than 1986!

Overall this game is not what I expected - it looks like something that was written in 1982 rather than 1986!