The second budget compilation from Zeppelin features four oldies from their budget range.

Darts on a computer: it doesn't really work somehow. If only someone could devise a realistic simulation of throwing - perhaps by chucking a light pen at the screen!

In Jocky's, you've got a very shaky hand - but at least your aim moves in predictable curves. Use the joystick to move it, and press fire to release the dart when it's over the right bit of the board.

It's a lot easier than it sounds and you're soon scoring 180s galore (I even managed an 11-dart finish!). And you need them to beat some very sharp computer players, either in a knockout or round-robin tournament.

There's also 'round the clock' and two-player head-to-head options, but the 'action' gets repetitive when you haven't got a pint of beer to sup.

Go-karts weren't like this when I were a nipper! But what purports to be a race game is actually a maze-exploring collect-'em-up. The computer-controlled cars are merely there to bump into you, removing a life. By leaving a cloud of smoke you can delay any pursuing cars while you search for collectable bonuses. That's about all there is to it... and very dull it is too. Come to think of it, you'd have far more fun with an old crate and some pram wheels!

It's hard and I hate it. Look, I know sometimes I complain about games being too easy, but this is ridiculous. Challenging isn't the word for this crude shoot-'em-up: the first few levels are near-impossible, and then it gets harder! It's so unplayable, and goes to prove that a high difficulty level is no substitute for good design.

Craps. 'Nuff said. Oh all right, but put your money on this and you'll surely lose. I've never understood the point of computer gambling simulations - I mean, no matter how well you do, a torrent of cash isn't about to come pouring out of your 64's cartridge port! In Las Vegas you can win or lose imaginary money in Black Jack, Craps, Roulette and Baccarat. It's gambling without the thrills.

With Jocky Wilson taking star billing, this pack's very short on entertainment value - even at the budget price.

This pack's very short on entertainment value - even at the budget price. 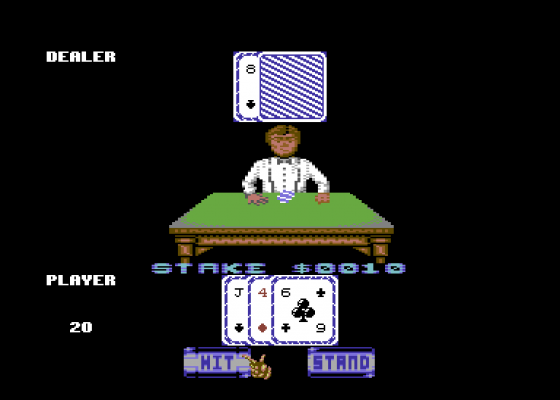