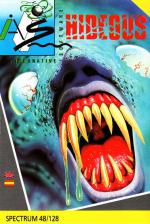 Nuclear power. A touchy subject, isn't it? Who remembers the Chernobyl disaster? Is it true that all the chickens in the area now have three legs, which grow back every time one is eaten? Can nuclear radiation really cause people to look like American TV presenters?

Alternative would make it seem that way, with their new game Hideous. Those top scientist bods are just too clever for their own good. Now they've invented a whole new form of nuclear radiation so strong that it has leaked out of its production plant and caused all the local (and some not so local) underground organisms to become, well, hideous. And rather deadly, too. Apparently Des O'Connor lives near this plant too.

The only way to stop more animals mutating is to get down to that reactor and block it up with lead bricks, hopefully stopping the rays from escaping. And that's your job. Mr. Guinea Pig.

There are four levels, each comprising of 30 glorious technicolour screens (five screens by six). On each level there is a nuclear reactor. There are also eight lead blocks. So get into your tank, locate the reactor and go searching for the mutant-preventing metal.

On each progressing maze level, there are more and more mutants per screen for you deal with (ie. shoot), and on the last level they even shoot back. So, the game does get progressively more difficult.

There are various other icons to pick up or avoid. These range from extra fuel and ammo boxes to bomb emplacements. If you trigger off a bomb, you'll lose a shield, and once all six are gone... byee! You can also pick up extra lives.

Once you've found a lead block, you'll have to take it back to the reactor. When all eight are in place, find the exit screen and move to the next section.

The graphics are very colourful but also very blocky. While sound effects are sparser than four star hotels in the Sahara Desert. But Hideous is still very playable and addictive. The game has a very strong puzzle element. And, luckily, the puzzles are extremely well thought-out and challenging. There are force fields to turn off, doors to open, buttons to press, bricks to push around. They'll keep you thinking until you solve them, and until you do, you may not be able to get to a certain position or screen critical to completing the level.

However (that dreaded word!), Hideous can get extremely tiresome. This is because you can only carry one object at a time. So, once you've picked up a lead block, you'll have to go all the way back to the reactor and pop it in place before you can pick up another one, which means you end up going backwards and forwards over the same old screens.

Basically although Hideous is good to look at and play, you'll soon get fed up with the same old routine. The puzzles are well devised though and it's the sort of game you'll go back to.

Hideous will keep you going for a while, but the novelty will soon wear off. Nevertheless, for four pounds it still stands as good value, and is worth checking out if you feel like a blast from the past.

Will keep you going for a while, but the novelty will soon wear off.