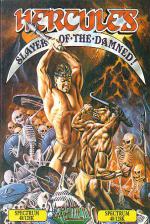 Ye gods! Let's shake, rattle and roll dem dry bones and make it a slay day. Gremlin tries its luck with Hercules: Slayer Of The Damned at a Barbarian-ish clone.

But Hercules is a hit and myth affair which lacks the glamour, sound effects, graphical superiority and brilliant playability of Barbarian.

However, it's not a bad little bash, thrash, drub and club game.

Here's the bare bones of the plot. Hercules, son of Zeus, has to complete twelve tasks. Yes, you guessed it, the twelve Labours of Hercules. Now this is not as complicated as it seems.

Playing the part of Hercules, armed with a club as well as a fists and feet, you battle away at sabre-waving skeletons. Above and below the action are symbols representing the labours. Every so often, a small puff of smoke appears on the screen and, if you manage to hit it with your club, you gain one of the labours. Collect all twelve and you move into the ultimate confrontation battle with the minotaur.

But several things stand in the way of collecting the labours besides the skeleton fighters. I found it very difficult to collect them. There I was thrashing away at the little puffs of smoke with little or no effect. And then, when I did manage to collect a few, this spider keeps popping down and whipping them back.

The fight action itself is fairly fast and the moves fairly limited. Some are given silly names such as Mountain Shaker, Titan's Gift and Pluto's messenger.

The most deadly appears to be Mountain Shaker which allows you to know off the skeleton's head.

The sound is awful, making the blows have all the impact power of a ping pong ball on water.

Personally, I never did make it to the final confrontation with the Minotaur. However, you can see a demo of the battle so you know what's in store. Whether you decide it's worth going for is up to you.

The trouble with these combat games nowadays is that the standards are now very high.

Just think of The Way Of The Exploding Fist, International Karate and Barbarian. Things just keep getting better. And if you can't top those for quality, then price has to be a big factor. Hercules doesn't have any real new dimension to it in the quality stakes and it isn't cheap enough to make it a real star buy.

Still, beat-'em-ups are always popular, and Herky-boy is such a great character that he sort of deserves a good game based around him, even if this ain't it.

It will be interesting to see how it does in the charts.

Hercules doesn't have any real new dimension to it in the quality stakes and it isn't cheap enough to make it a real star buy.