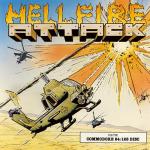 Ever fancied mucking about in helicopters just like Noel Edmonds. No? Well, go away then.

Still here, are we? OK then, get over to that bit of hostile territory over there and create a bit of heat. Your 20mm cannon fires forward continuously, but your missiles have to be targeted by manoeuvring your sights. Bang.

Enemy missiles aren't as powerful but follow you doggedly until their guidance systems get bored or you make good your escape with a quick burst of turbo thrust.

No, this doesn't look like it's a cross between Afterburner and Thunderblade. Not a bit. Well, all right, it does - and it's not terribly good. The graphics aren't too bad stationary but when they move, they don't create any really convincing 3D effects.

When you bank your helicopter, the chunky rows of landscape graphics turn into a flight of steps - and ground objects (like towers) don't lean over to stay at a right angle to the horizon.

Ignore the graphics and the suspect collision detection, and you should get a few hours of blasting entertainment 'coz it does have a few neat touches.

There's the ejected pilot for one. Can you imagine an ejector seat in a helicopter? Boom. Shkshkshkshk. Urgh. I hate kebabs.

Oo'eck! This could cause a few problems! This game owes a little to those 3D flying game we all know and... er... know. Unfortunately, the 3D effect in Hellfire Attack isn't too realistic, especially when the horizon tilts and leaves the ground objects straight.

Or maybe that's what it looks like in a helicopter...? The enemy helicopters and planes don't exactly present a playable challenge as they vary from incredibly easy to impossibly hard with no inbetween stage.

This isn't exactly my idea of playability but it could appeal to those who like nothing more than sticking a pound coin in those arcade thingies for a few minutes' flying.

Presentation 66%
Nice cartoony title screen and a few neat touches, but nothing to make the game any more interesting.

Graphics 41%
Individual sprites aren't bad, but the jerky 3D effect doesn't provide much in the way of exhilaration.

Sound 51%
Bland music and jingles, but the sound effects are atmospheric.

Hookability 50%
Easy enough to pick up and play, but not overly addictive.

Overall 48%
Don't expect a thrilling 3D arcade experience and you won't be disappointed.

Don't expect a thrilling 3D arcade experience and you won't be disappointed.