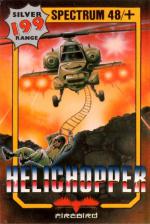 This is a bit of a yawn, I'm' afraid. It's a step back to the days of the game with just one screen that only varies by having different types of aliens moving around it.

You are in control of a helicopter that must pick up little men from the right hand side of the screen, and fly them to safety on some ledges on the opposite side. Between you and safety is a swamp, from which a number of deadly creatures issue forth (including the wonderfully named Dollopoids). Your helicopter is armed with bombs which you can drop on these creatures in order to clear your route across the screen.

And that, as far as I can see, is all there is to the game. After rescuing enough men you advance to the 'next' screen, which is really just the same, but with different creatures in your way. It's mildly amusing for a few minutes, but no longer. I made the effort to get a few screens into the game, just to be fair to it, but no surprises emerged and I got bored quite quickly.

Umm, what else can I say about it? Well, the graphics are nice and colourful, with nice big sprites (like most Firebird games, which makes me wonder if they're trying to develop some sort of house style). That's about it really.

Mildly amusing for a few minutes, but no longer.