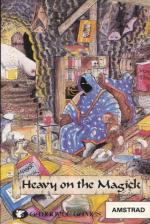 Ever since computer games first flashed onto a screen or tapped onto a teletype, aspiring programmers have dreamt of the "interactive movie". Now, laser disc games apart, Gargoyle have come up with what must be one of the best attempts so far to realise that dream.

Heavy On The Magick gives you a horizontal window display of your location, including the character you control, together with three information panels at the bottom of the screen. The first of these, gives information on your inventory, magickal status, and immediate location; the second echoes keyboard entry and displays the program's replies; the third keeps an eye on your stamina, skill, and luck.

And luck you're going to need because this is a very tough game indeed. Axil the Able, whose life depends on your keyboard entries, has been confined to the dungeons beneath Collodon's Pile by Master Therion the Wizard. Somewhere in this multi-level nightmare are three exits which Axil must find with the aid of his wits and a spellbook.

At the start of the game you are allocated values for Stamina, Skill and Luck. A typical initial allocation would be about 34, 12, and 3 respectively, and if you don't fancy this you can swap the values around, giving for example 12 for Stamina, 34 for Skill and 3 for Luck. As a general rule, however, the beginner will probably want as much Stamina as he can muster.

Once you've left the initial set-up screen you find yourself in a room with two tables, one of which bears a magickal Grimoire (spellbook to you and me), the other bears a message of a more fatal nature - touch it and you die horribly. This is typical of the puzzles in the earlier part of the game where, for the most part, providing you examine things carefully before handling them, you shouldn't have too much trouble - unless you happen to die in battle.

Part of the reason for this is that the number of available options are not that great. The program depends on keyboard entry, but restricts you to an unusual two-word structure which takes the format "Keyword Object". There are in fact only six basic keywords, each of which is entered using a single keypress. These are Z, which toggles the information display in one of the panels between inventory, magick exits, and location details; O, which returns you to the Options screen (to save a game for example); X, for eXamine; P for Pick up; and D for Drop.

In addition to the above you've got movement in eight directions and, at the start of the game, three spells. The spells are your only lifeline when you set out, and they give you the power to invoke a demon, or blast/freeze an opponent. Even though the use of words is limited, it's claimed that the program understands 400.

Further on in the game, however, the puzzles become somewhat tougher to crack. Many of them depend on wordplay or the correct use of objects found, and you'll find yourself having to listen very carefully to Apex if you're to rise up through the ranks of magickal mastery.

There are four demons to invoke - Asmodee, the Prince of Destruction, Astarot (who can transport you to a named place), Belezbar (who can reveal the nature of an object), and Magot (who tells you where things are). You won't crack the game without using the Demons extensively, but you can't get them to appear until you've found the talisman that controls them. Asmodee, it goes without saying, should be used with caution.

The game area covers 255 different rooms, has 280 objects and going by my own slow progress, is enough to keep you busy for quite a while. I discovered fifty different locations within an hour, and there are several different levels. Mapping is difficult since you have to construct a different map for each level showing the stairways that connect them. Most of the initial puzzles involve the opening of doors, which will respond either to passwords or the presence of particular objects. To help you here, there's an ogre called Apex who will appear occasionally and answer your questions.

In fact any object or character can be communicated with, using the structure "Character, Object". For example, "Apex, Table" may elicit the helpful response "It's A Table", or possibly something a little more revealing. As a general rule, however, the best form of communication is blasting. On your travels you will communicate thus with countless trolls, wyverns, goblins, vampires and other unpleasant characters, many of whom are likely to send you to an early grave if you don't either blast fast or run faster.

Every command you enter will result in some action on screen, even if Axil only shrugs his shoulders in incomprehension. Most actions drain your energy by a point or two, and some increase it. Once your energy reaches zero you're dead, but happily you will find that saving games at the end of each session will enable you to retain your experience rating for future endeavours. This is important because experience governs your performance and increases the number of spells available to you.

In fact, to locate all three possible exits in the game you will have to rise from the lowly position of Neophyte to the exalted rank of 4th Grade Philosphus. This will involve a fair bit of gameplay and puzzle-solving, and certain demons whose aid is essential but who cannot be invoked until you have reached the requisite experience level. Gargoyle have intimated that future games will provide further challenges and the opportunity to rise yet higher in the magickal social circle.

It's a pity that there aren't more options available, and that some of the objects are a little hard to pick out on a green screen. But, these minor niggles apart, this has to be one of the best options yet for anyone interested in a spot of derring-do down in the dungeons, combined with plenty of puzzles, pleasing graphics and animation into the bargain.

Still playable, but some of the objects are a little hard to identify.

One of the best options yet for anyone interested in a spot of derring-do down in the dungeons, combined with plenty of puzzles, pleasing graphics and animation into the bargain.