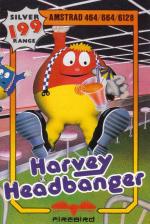 What's so great about a single screen budget game which you can learn to play in 10 seconds? Gameplay - that's what. Despite its simplicity this game has mind-warping, addictive gameplay that make it an essential buy, and difficult to stop playing once you've got it.

The key to the gameplay is originality. You won't have encountered a game quite like this before on a computer, even though it is such a simple concept. The game takes place on an 8 x 6 grid of squares where Harvey Headbanger and his rival Hamish Highball try to outwit each other in a test of skill and fast reactions.

The roles of Harvey and Hamish can be taken by either two players, one player against the computer, or the computer can control both in a demo game. The one player game is tough, but obviously a lot more fun can be had when two players battle against each other. H and H are spherical, buck toothed, wild haired, bug eyed lunatics who have a novel way of getting around the screen.

The grid is split horizontally by lines from which the protagonists can swing from side to side, or jump up or down to change lines. This brings a great look to the action because they are wonderfully animated and totally manic. They can swing freely about the grid, making right angled turns when changing direction.

The two H's each control a different colour, changing a grid square to that colour when they pass through it. The idea isn't to turn the whole grid to your colour, but to try to encircle your opponent with squares of your colour so that the space within, including your opponent, gets filled in. This wins a game and a set number of games, specified at the start, will win the contest as a whole.

It isn't that simple though because either player can gain an advantage over the other by creating and drinking cock-tails. Yup, you read that right - cocktails. The names of the fat fighters may have given it away and there are yet more silly drinks involved. These are the Slim Jim, Hong Kong Fizz, Crystal Highball and the Tequila Sunrise, all of which have a desirable effect on the H that manages to drink them.

Cocktails are created by encircling a coloured area of your opponents squares with your own. They can then be passed over and drunk, increasing the liquid level in a straw at the side of the screen. This becomes important when the two fatties collide on the same square. They turn black and spin off completely out of control, but the one with the higher liquid level will regain control first and can try to encircle his helpless opponent as he reels around the screen.

When a player is trapped he disappears in a splodge of colour leaving a pair of boggling eyes. Enemy cocktails can also be removed by encircling them, causing them to disappear with a colourful Zap. They also disappear if left undrunk for too long. Victory is greeted by the winning player swinging full circles on a line.

The animation and use of colour give the game a cartoon feel, and the musical ditty that tinkles along during play sounds nice. The gameplay is the clincher though with the five computer skill levels providing stiff opposition to start with, and a human opponent giving more unpredictability and excitement to keep the action going. One of the most addictive and impressive budget titles I've seen, particularly when you play with two players.

Cute graphics and murderous gameplay will hook you and keep you hooked. If you like arcade action and board-game strategy then fasten your seatbelts, 'cos this has got both - at the same time! The computer's Hamish gets vicious on the higher levels and a human opponent is even worse, so you'll have to think fast and move faster. Great value at five times the price!

A colour changing option keeps everything nice and visible, but it's a shame to miss those bright, clean colours.

N. Computer opponents are good but follow predictable patterns at the start of each game.

Cute graphics and murderous gameplay will hook you and keep you hooked.