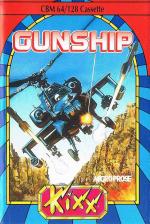 The Hughes AH-64A Apache is reputedly the most sophisticated helicopter gunship in the world. It's also the most likely to make enemy troops run in the opposite direction, mainly because anything carrying that much butt-kicking equipment deserves a respectful eye kept on it.

First reviewed in issue 24, Gunship sets the fortunate (or unfortunate, depending on how much of a coward you are) player in the 'driving seat' of this multi-million-dollar death wagon. There are five scenarios, including the essential training exercise and an obligatory East/West ruck that sees many millions of dollars worth of equipment trashed (hopefully not yours).

After correctly identifying a vehicle in the 'get this right or I'll bung you into training whether you like it or not' test, the option screens appear. There are three flying styles, representing the difficulty of the opposition, and four reality settings: simplified or realistic flying/landing, variable or clear weather and the quality of the enemy's armament (whether they can shoot straight or not).

Following this is a briefing, essential if you're to avoid any nasty international incidents. The Apache's main armament is an internally mounted 20mm cannon, but extra armament is available. There are FFAR, Hellfire and Sidewinder rockets, and you also have defensive capabilities in the guise of ECM jamming, chaff and flares.

It would take all day to describe the full ins and outs of Gunship, suffice it to say it's a swine to learn.

Even though Gunship was first reviewed in early '87, it's still very playable today. As expected, the wire frame graphics are slightly outdated by current standards, but sim buffs will find the game enjoyable.

The only real pain in the bum is the cassette multi-load: it's a real drag unless you have the patience of several saints. Grossly overpriced when first released, the cassette version of Gunship is just about worth its four quid price tag now. Rotors ready? Then let's rip!

Very playable, although the wire frame graphics are slightly outdated by current standards.