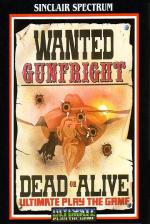 Howdy, pardner, and look what jest rode into town. There wuz a time when the newie from Ultimate meant makin' for the saloon but nowadays.... well, we's none of us too sure if they're goodies or baddies.

Hey, I think I recognise this partic'lar varmint. It's that fellah Nightshade with a cowboy hat. Sure is the same technique used to draw the western town, the same animation of the central figure.... and durn me, If the plot ain't mighty similar too.

This time you take the sherriff round the town, shooting bandits and avoiding the populace which consists mostly of sassy women who scuttle into you and kill you. I'd rather face up to the James gang, though don't get gun happy with a local lovely or you'll pay fur it out of your bounty. That leaves less money to buy bullets, the price of which rockets faster than a mute that's sat on a cactus. And talking of quad-ru-peds (Ker-spitt! KLANG!!) there's a hoss to be found aroun' town, though as it's of the panto rather than the pinto variety you'll have to do the runnin'.

Now most of the rogues are jest Mexican marauders who sit there waiting to be shot, but every so often you'se gonna meet a gen-ew-ine grade A outlaw, and that's when you'll need all your quick draw marksmanship. Only, durn it, if I didn't wander fur so long without meeting one.

What ah'm tryin' to tell yer is that despite the mildly economic overlay of bullet an' hoss buyin' and bounty collecting, this is another Ultimate repeat and if you didn't have Nightshade and you're a fan of shoot-'em-ups set among durn purdy pictures it'll make you whoop with joy.

Another Ultimate repeat. If you don't have Nightshade, and you're a fan of shoot-'em-ups set among durn purdy pictures, it'll make you whoop with joy.