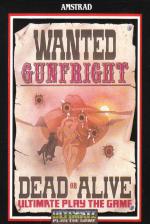 When Ultimate brought out Alien 8, many people cried rip-off because of its similarity to Knight Lore. Now they are set to face the same problem with this wild west romp, as it looks like Nightshade - and this time the game doesn't come out smelling of roses.

The game is set in a wild west town where you, as the Sheriff, have to hunt down and kill outlaws for the bounty. The town is shown in the same 3D perspective as Nightshade and Knight Lore, with building fronts disappearing as the Sheriff walks behind them, so that you can see where you're going. Buildings can be entered through open doors, but there's nothing of interest inside - unless one of the other game characters is already in there.

The town is populated by an extremely annoying and stupid group of people who seem intent on stopping the Sheriff doing his job. There are lots of women who wander aimlessly around and, when they bump into you, kill you. This doesn't seem like civilized behaviour to me, but is as nothing to the fact that bumping into small children and cacti also knocks off a life. You can of course shoot these innocent bystanders down when they get in your way but you'll be fined for it, reducing your bounty.

The outlaws appear one at a time and before you can get into a gunfight you'll have to find them. This can be done by just wandering around the town, but the children will help guide you to them - they bounce up and down on the spot pointing in the direction of the target, turning to face him if he moves around.

Once you've located the bad guy, you need to shoot him once to get onto the gunfight screen. Here the man appears in 2D on the screen, and as soon as he draws his gun you have to move a cursor onto him and let him have it, otherwise he'll riddle you with bullets. Draw too early and you'll be branded a cheat, ending up with yet more holes in you.

Once you have disposed of one killer you have to track down another with a higher bounty on his head, and of course a quicker draw. The appearance of the killers changes but isn't always appropriate; I mean Ma Baker in the wild west and with five o'clock shadow?!

Apart from the children, the only other help you get are from horses which can be 'ridden' if you want to move faster. They don't last for very long, but while they do, you can trample women and children under foot - most gratifying. Bullets and horses both cost money though so you won't want to use too many of either.

At the start of the game and after every few outlaws there is a bonus screen where you can practise shooting bags of gold. This should prepare you for the fight screens and helps the bank balance. Another thing that appears if you shoot enough men are balls of tumbleweed that blow around the screen, making your progress more dangerous.

The graphics and action are far too close to Nightshade for comfort, and although the game is more interesting than its predecessor it loses a lot because of its lack of originality. If you've got Nightshade this probably isn't worth getting but if you're fresh to Ultimate's games then it should impress. The action is quite compulsive and the game has a good sense of humour, but those womenfolk are tremendously annoying as they behave more like outlaws in drag than law abiding citizens - I say waste 'em with a hail of leaden death.

This one's not just derivative - it's also rather dull. There's a large town you can explore should you want to, but it all looks the same, so why bother? As for action, those women will drive you up the wall but dodging them is hardly addictive. The horses are funny at first, and the town looks good - but once that wears off, there isn't much left.

Colour isn't a strong point of this game so it plays fine in green - but the original yellow was a bit more atmospheric.

N. Main gameplay is just like Nightshade.
N. Little depth to the action, you keep doing the same thing.

The horses are funny at first, and the town looks good - but once that wears off, there isn't much left.