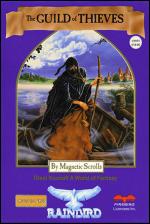 We've already taken a preview peek at this game on the Atari ST but now we've got the C64 version, I can give you the low low low-down.

First let's do a bit of image stripping so we can see what the game itself is actually like. Magnetic Scrolls leaped into the headlines last year with The Pawn - stupendous parser, brill graphics, interactive characters, original scenario, new software house - well, almost!), Rainbird marketing and multi-format availability.

The last two points are very significant - there are really only four companies in the UK that have marketed their games forcefully across all formats - Adventure International (now defunct), Adventuresoft (via US Gold), Level 9 and Melbourne House. Some might wish to include CRL, but it only just scrapes in as it's not a dedicated adventure software house. Magnetic Scrolls is therefore a big fish - albeit in a very small pool.

Secondly, a lot of this media hype arose because of the strength of the parser and the graphics. Journalists who would never have been seen dead playing an adventure suddenly went all ga-ga because of the pretty pictures. And the parser meant that they could communicate with the game.

Therefore a whole legion of self-appointed adventure reviewers sprung up proclaiming The Pawn to be the best thing since sliced bread.

Meanwhile, for us dedicated adventurers, the real question has yet to be answered - are these Magnetic Scrolls adventures actually good games? Are they worth your £19.95, or is 90% of the satisfaction derived from just looking at the pretty pics and entering "Put the ivory key in the swag bag and then drop the poison on the steps".

I sat down to play Guild Of Thieves with slight misgivings. I wondered why this was... and realised to my horror that I hadn't actually enjoyed playing The Pawn very much. Sacrilege! But, although others will doubtless disagree, I think that it was just a bit pretentious. It had some great puzzles, but the scenario was a bit odd... well, let's say I found it a bit - gulp - dull!

So it came as quite a pleasant surprise when I found myself getting very engrossed in Guild Of Thieves. It may not be as original or way out as some of the things we've seen lately, but it's definitely shaping up to be one of my favourite games.

You start off sitting in a boat in mid-stream with a representative of "the Guild". To gain admission to this august body you must loot the surrounding countryside of all its valuables. So, unlike The Pawn, we have here a very traditional scenario - the good old treasure hunt.

If you're wondering why there should be anything good about sticking to traditional themes instead of inventing startling new plots, the answer is that the very structure of adventure programs revolves heavily around locations and objects. It makes sense therefore to have a scenario that rewards the discovery of locations and objects with good solid points!

So traditionalists will note with glee the score counter constantly displayed at the top of the screen together with the number of moves you've made).

The parser is once again magnificent. You can make a lot of use of your good old swag bag for example. "Put all except the lamp in the swag bag and close it" will execute rapidly and without difficulty. This means that playing the game becomes an enjoyable exercise of the imagination, rather than a battle of misunderstood words.

As you move about, you'll start to make use of another feature of the parser - the "Go to" command. Once you've visited a location or "Examine"d and object you can "Go to" it from another place. In the Golden Wheatfield, for example, typing "Go to temple" or "Go to statue" will take you rapidly through the intervening locations to the temple (where the statue is).

There are two points to note about the "Go to" command. First, it can kill you if you're not careful. For example typing "Go to temple" in the Lounge will take you out of the castle by way of the raised drawbridge and irate door keeper - not a very good idea, and once you've entered the command, you can't take it back.

Second it appears to "go" only "to" objects that you've actually "examine"d. This can be misleading. Take the temple again - the room description says clearly that there is a statue there, but entering "Go to statue" later will do you no good unless you've examined it. Apparently, seeing it is not enough.

The "Go to" command is particularly useful when storing your treasure. Valuables aren't that difficult to find to start with, but the inexperienced player may wonder why picking them up doesn't increase his/her score. The answer is that they only register when you've put them in one of the Bank of Kerovnia's safety deposit boxes.

Use of the safety deposit boxes highlights another excellent feature of this adventure - the game design. All of the puzzles are wonderfully constructed - logical, sometimes quite difficult, and very satisfying to solve. For example, the safes will not relinquish an article once it's been put inside. So you have to be quite careful about banking your treasures, making sure first that what you have is a treasure and not something that you will require later on.

Having played the game on both the Commodore and the ST, I found one aspect to be less than satisfying - the disc accesses. The game comes on two discs, and although actual disc swapping is kept to a bare minimum, the old 1541 grinds away for ages. Even Infocom disc accesses seem quicker than these, and at tense moments I found the delays a real annoyance.

There's a particularly long access when the game loads in a new graphic scene. The pics are great, but if (as with most people) your expectations have been raised by seeing the Atari screenshots that most other magazines printed, then you are in for a slight disappointment. You certainly won't find yourself complaining about the lack of illustration, although sometimes you may find yourself wasting time examining objects that are clearly shown in the drawings, but don't in fact exist within the program.

Guild Of Thieves is an excellent program combining Magnetic Scrolls' programming expertise with a more accessible scenario and some excellent puzzles. It should take you a long time to finish and numerous "Save"s will be needed. Sadly there's no RAMsave option and - equally annoying - no catalogue function to enable you to check up on previous saved filenames. However, these are minor quibbles about a game that's destined to be a classic. Even at £19.95 you can't go far wrong.

Destined to be a classic. An excellent program combining Magnetic Scrolls' programming expertise with a more accessible scenario and some excellent puzzles.