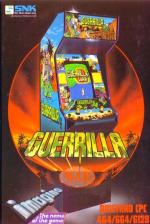 Having scored a couple of hits with Ikari Warriors and its follow-up, Victory Road, SNK's next outing into the arcades was Guerilla War, another one- or two-player scrolling fighting game. Although it may not have scored highly for originality, the coin-op was colourful and, most importantly, really playable. This was one of my favourite coin-ops this year, so the news that the conversion was in Imagine's capable hands pleased me no end. But what a surprise I was in for...

Set on a tropical island, the object is to guide a guerilla (or two) through town and jungle in an effort to free the paradise from the cruel oppression of an evil dictator. Mercenaries appear at every corner, armed to the teeth and determined to put a stop to your progress.

Along the way there are a number of hostages to be freed and extra weapons to collect, including flame throwers, bazookas and even tanks! These are collected by walking across them, and last for 50 shots or until you bite the dust - whichever comes soonest. However, rescuing a hostage renews your ammunition (or fuel if you've driving) and adds a meaty 1,000 points to your collection.

So with all of this in mind, I stepped off into the unknown to try to beat the dictator. And this is where the problems started. Firstly, the graphics are so indistinct that it took a couple of seconds before I knew which way the character was even facing... and you can't hang around for a couple of seconds in a game like this... uuuuuurgh! One life lost.

The next character appears and it's off towards the enemy at last. The trouble is that the play area is so small that you don't know if there's anyone ahead until too late... aaaargh! Second life gone.

Back to the start again - and a few minutes later I'm actually in a tank and steaming off through the jungle. What's this approaching? It's only a foot soldier with a gun - no problem... Booom! Third and final life up the spout. How can that happen? My tank has been destroyed after approximately 1.5 pico-seconds by a footsoldier!

And Guerilla War carried on and on like this for just as long as I tried to get to grips with it. Even the inclusion of a 'rotate' mode of play (which is supposed to imitate the swivel heads of the original's joysticks) doesn't help matters as this is, if anything, even worse than standard set-up.

It's been a long long time since an Imagine product has disappointed me to this degree. A perfectly playable and entertaining coin-op has been chewed up and spat out as a flickering and stuttering mess. If you really want a game of this type then check out Victory Road... it can only be better.

A perfectly playable and entertaining coin-op has been chewed up and spat out as a flickering and stuttering mess.