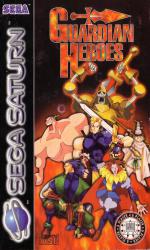 They sound like super powerful foster parents, and they have arms that look like cocktail sticks with peas for muscles. One of them is a rabbit called Edward M. Cognac that can turn itself into a fireball, and another is called Randy. So who are they? Escapees from the Dykebar Mental Hospital (one for the Yob anoraks there), or the tramps who rummage through our rubbish bins every night? Unsurprisingly the answer is neither of them, as they are the characters from Sega's new beat-'em-up, Guardian Heroes.

Although released by Sega, Guardian Heroes was programmed by the gaming wizards down at Treasure, who you'll know bought us classics like Gunstar Heroes and Dynamite Headdy if you read last month's preview. As they are renowned for their action-packed ultra playable games, it comes as no shock that they are following their tried and tested method of beating the crap out of multiple characters in this, their first attempt at a Saturn game. Whilst you are on your way to rescuing the princess (who, in an innovative twist, has been kidnapped by an evil force) you must fight your way through droves of enemies in a bid tosecure her safety. Along the way you may come across a few buddies who can be recruited for short periods of time, and often they can prove the key to unlocking a particularly nasty boss character. but the thing that really sets this apart from the other beat-'em-ups is the range of storylines. There are over 25 levels to explore, and these can be tackled in virtually any order, even missing out half of them if you want. The storyline is different for each of the characters, meaning buckets of blood, sweat and teats will be shed before you even get near to finishing this.

As far as we can tell, this is an all-original idea that Treasure came up with especially for the Saturn.

Rescue some Princess, while giving the baddies a good kicking. A novel idea if ever there was one.

The intro has been dept up to the same standard as the rest of the game's impressive graphics in order to set a similar tone. The superb Japanese cartoon style has been transported over as the story depicts the rise to power of the evil clan, the kidnap of the Princess and the warriors who are aiming to get them back again.

Something that was added after we played the 80% complete version is the pause screen. This gives you snippets or info about the character you happen to be playing. It may not serve that much use in general, but helps in places. It tells you what level of experience you are on, and the numbers at the bottom show how many experience points you have and how many points you have to go until you can go up another level.

To gain experience points, all you have to do is battle with opponents. Also displayed are your hit and magic points, current and maximum levels and your character elements, which you increase when you upgrade yourself at the end of certain levels.

The great thing about Guardian Heroes is that every time you play, the chances of finding something new is high. This feature serves a real purpose in the multi-player mode. For every character you fight against, he or she will be available to select as a playable character in the versus mode. However, they only become available to play as once they have been beaten.

As you become more and more familiar with the game, the last two or three characters become fiendishly difficult to find, with you continuously retracing your own steps. And keep an eye out for some of the characters from Treasure's Megadrive game, Gunstar Heroes, who make guest appearances later on.

The amount of different paths you can take is frankly dazzling. At certain points in the game, after a boss has been defeated or you are about to face a particularly nasty stage, you are given a number of choices to decide which path to take, or who to fight. For some of the characters, whose levels are different from others, so to say you never get the same game twice is a bit of an understatement.

Once these choices have been made, the length of the game can increase or shorten as a result. The ending can also be different, depending on who is fought.

How do they do it? Treasure have created another masterpiece with this game, and if this is anything to go by, the Saturn, Sega and Treasure are going to have a beeeeeeautiful relationship.

Everything about this game oozes class - the graphics, the sound, and especially the playability. The thought of finding all the characters to play as may seem like a daunting and slightly boring prospect but, to tell the truth, it creases the game's lastability tenfold.

The idea of having three planes of battle also adds a bit more novelty to the proceedings, and means that fights will be going on all over the shop, with chaos and "hit the buttons and hope" type gameplay the name of the game in desperate situations. All this on-screen mayhem is a great laugh - never before has anyone attempted to cram in so much action. There are however some sections of slow-down, not so much because of the amount of characters visible, but because of the awesome magic spells being used.

Combos are also really easy to do, especially with magic thrown in. I managed a 154 hit with Ibuchi and his particular blend of magic power. Standard combos can be pretty devastating as well, with two or more characters ganging up on one, to get up to 50 hits. There's nothing more to say than invest in this highly original, highly entertaining, multi-player punch feast. Awesome.

Guardian Heroes is an excellent piece of programming, typically Treasure, and so many of its features are particularly original: real manga graphics, multi-plane action and considerable variety in the course of the game depending on character and plot choices.

The backbone of the game is magic, with spells instantly accessible and stunning to behold. But I have to go out on a limb and wonder if the playability is all it's cracked up to be.

Sometimes the action is just too manic to feel properly in control, and the huge amount of continues on the Japanese version makes the game structure feel too 'loose', with you penetrating too far too quickly. Hopefully, Sega Europe will take note and make this an untarnished classic in the UK.

Graphics 92%
P. Every player looks excellent, and the cartoon style suits the game down to a tee.
N. Some of the scaling is a bit dodgy.

Effects 91%
P. All the 'arggh', 'eeuuff' and 'rarrgh' noises are here, and all the funny cheats that no-one can understand.

Playability 93%
P. Loads of characters and loads of levels means there is plenty to play here.

Lastability 94%
P. Virtually a different game every time you play, and so many characters to find, and a six player option and...

Overall 93%
Awesome. Multi-player beat-'em-ups now have a grand master to look up to. And envy.

An excellent piece of programming... So many of its features are particularly original: real manga graphics, multi-plane action and considerable variety in the course of the game depending on character and plot choices.