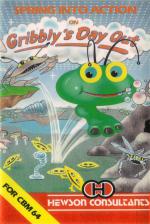 This is one of the most original, cute and playable games to hit the 64 this year. It features a tremendous new character in Gribbly Grobbly, and lots of ingenious ideas.

Gribbly's task is to rescue, one at a time, eight baby 'gribblets' from the surreal landscape, and place them in the safe haven of a cave. If he succeeds he tries again on a new piece of landscape - there are 16 in all, each one much larger than the size of the screen picture, which scrolls smoothly to follow the action.

Gribbly has one big foot, two bulging eyes and a big mouth. He can hop relatively safely around the ground, or levitate and float about. The gribblets are located on flat stretches of land and Gribbly has to find them and pick them up. The pieces of flat land are often very small or hard to get at, and can float unsupported in mid air.

Gribbly survives on his reserves of psi energy which are depleted every time he collides with one of numerous hazards about. The jagged landscape is one of the biggest difficulties because, while levitating, you can run into any rough surface, trees, bushes, cans or pools of water.

Another energy-sapping danger is the triangular web which occupies large areas of the screen. However Gribbly, by careful manoeuvring over special switches, can turn on and off sections of the web, and on some levels this is essential to open up areas of the screen. The web will also disappear completely when you only have one more gribblet to collect, allowing you free movement. This is a mixed blessing in that a dangerous, crab-like creature called Seon is also released and he quickly homes in on you.

The layout is different for each level and finding the cave isn't always very easy. What's more, the caves on later levels are tricky to get into. Interesting landscape features like waterfalls, which you can fly through, and tall rocks also appear.

The other inhabitants of the game mutate through several stages before trying to grab a gribblet and carry it off. They start as sycamore-like seed pods floating to the ground, where they turn into topsies. These are worm-like creatures with a suction cup on each end to flip over along the ground.

If they find a gribblet they flip it onto its back, exposing its brain. After a while they turn into a chrysalis, which produces a stomper. If one of these encounters an inverted gribblet, it transforms into a winged creature and carries away the unfortunate gribblet.

In the first three stages of their lives, you can destroy the creatures with bubbles from Gribbly's mouth. In the fourth stage you can only turn round the stompers, while bubbling a winged beast will release the gribblet it is carrying. As they fall they release a heart-breaking scream, but you can catch them in mid air or allow them to fall safely onto flat ground - but a landing on anything else will result in their death.

Psi-grubs are also to be found and, if landed on, give you more psi-energy which can be added to the bank at the end of a level. If you don't save at least six gribblets you have to repeat a level, whereas if you rescue eight you can advance three levels.

Control is incredibly easy, with a lovely bouncing action and great inertia and gravity when you're flying. The graphics are really cute, with Gribbly smiling when you do something right and scowling when you goof up. The gribblets are also superb, occasionally flipping about in the air as they enjoy the sunshine.

The colours on each level are different and often garish, but merely add to the cuteness of the game. There is a title tune plus some nice bounce and bubble sound effects.

The cassette is accompanied by an extremely entertaining little booklet outlining the scenario behind the game.

The action, you read, is set on the planet BLABGOR, and Blabgorians such as Gribbly have large heads and only one foot because their large quantities of psychic energy (obtained from a psi-bank) allow them to levitate and carry things without hands.

SEON is a mutated Blabgorian who absorbed evil psi thoughts when setting up the psi-bank, and the web was created to control this insane being.

Needless to say, each mutation has its own moronic speciality: SEED PODS forget they can be bubbled, TOPSIES can't see and they have inferiority complexes over their lack of a brain (which is why they want to capture gribblets), and STOMPERS blunder around falling off cliffs and drowning in pools because they think they're clever and don't trust their sense of touch.

For once, the humour of the scenario is perfectly captured in the actual game-play.

This game is unashamedly cute and benefits greatly from it. The scenario, control methods and characters make it tremendously original and terrific fun to play. The graphics are excellent and very distinctive and the sound effects are delightful. The levels get really tough, and all this combined makes a brilliant game.

This fantastic little creature appealed to me immensely as soon as I met him. What a character! He smiles if you do well, scowls gloomily if `you make a mistake, and stands looking bored if you leave him for too long. When he moves about, he looks about excitedly and blinks occasionally. Movement and the feel of Gribbly is superb: collecting gribblets has never been so much fun. I absolutely adored this game and I strongly recommend that you rush out and meet the greatest character since Rockford.

The highly original, unusual and humourous scenario combined with the cute, amusing graphics and excellent control methods, got me immediately hooked. I especially liked Gribbly Grobbly's different expressions and the way everything has individual character. I'm still every bit as hooked as I was when I first played and . . . excuse me, a manky little Stomper just whipped one of my gribblets!

Presentation 92%
Funny and imaginative scenario in a great storybook.

Originality 94%
A marvellous new character with unusual control and scenario.

Hookability 91%
Easy to master controls and the scenario strongly attracts.

Lastability 88%
There are 16 diabolical levels.

Value For Money 90%
A brilliantly original game with terrific control and a demanding task.

A marvellous new character with unusual control and scenario. A brilliantly original game with terrific control and a demanding task.