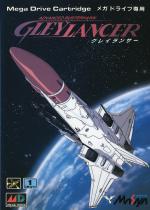 To the average chap in the street, any lone pilot who pits himself against a full alien empire is seen as being a bit funny in the head. However, the aliens of the universe seem to respect their true Tommy grit, to the extent that no empire is complete unless it has at one time or another been ravaged by a one-man death machine. However, this poses something of a problem for the up and coming designer alien empire who might not actually want to invade our solar system, kill loads of people and then have terrible revenge wreaked upon them.

One race in such a bind lighted on a simple solution - kidnapping all of Earth's crack pilots, teleporting them into a section of space filled with heavily armed gunships and blowing them up. This crafty plot probably would have succeeded too, but those xenomorphs went and forgot to kidnap the most dangerous pilot of all - twelve year old Lucia Cabrock. In her rage over her father's kidnap (crack piloting obviously runs in the family!) and indignation over being overlooked as a threat simply because she's a pre-teenage schoolgirl, Lucia leaps into her top secret CSH-01 Greylancer and sets off for revenge.

Fly the horizontally-scrolling landscapes, shooting everything in your path.

The Grey Lancer certainly is advanced. Not only does it possess such sophisticated weapons systems, it also has a variable speed gearbox too! This allows the pilot to alter the velocity of the ship at the touch of a button.

Although top speed is the handiest for space combat, there are times when slower speeds are essential. One prime example of this is a section on a later level where a number of rocks fly past and there is only one safe spot on screen. At top whack, the screen scrolls too quickly forcing the pilot to duck out of cover whilst there are still rocks about. More safety conscious drivers have plenty of time before the cover scrolls off-screen.

Although the Greylancer ship starts out with a pretty pathetic rapid fire cannon, upgrading your defences is simple. Every so often, a weapons pod is found floating around in space. Destroy this and any one of a number of armaments are up for grabs, depending on the icon released. Once you collect your first weapon, it arrives in the form of a spheroid satellite which hover close by your ship. Another cannon platform is awarded after the collection of your second weapon.

However, from this point on, every weapon collected replaces the weapon on both satellites, so there's no room for Mr. Two-Different-Weapons-At-Once. The power-ups available are listed here:

Like that kid's wooden horse in the song Two Little Boys, there's room in Greylancer for two. Lucia, in her wisdom, has opted to bring her gunner chum Ralf Grey along with her to manage the mass destruction side of things. However, most of the work is done by a targetting computer, which has seven programs, so Ralf's duties are confined to things like locking an aim.

However, once a main program has been chosen at the beginning of the game, it is locked in until the end of that credit. The programs and their applications are as follows:

Lives:
No changing your lives either.

Scenario Mode:
Turn the occasional intermissions on and off.

Button Controls:
Change the functions of the buttons around.

Greylancer treads the well-worn scroll, blast 'n power-up boards with a few new ideas to show off. Its best point is its different firing modes, but what a shame to only allow the player to pick one mode at a time. Cycling through them mid-game would have added a whole new aspect to the otherwise dull proceedings.

Another problem is that you spend more time dodging things than blasting, which quickly gets tedious. The game desperately needs more action.

But what really killed it all off for me is that the game is very easy to complete. Shoot-'em-up fans should breeze through this within a day. The graphics, sound and presentation are all okay, but really Greylancer falls flat in the playability department.

If you're after a decent blaster there are loads of better ones than this - Thunderforce III and IV, Helfire, Gynoug, Bio Hazard are just a few of the alternatives.

Calling Greylancer a shoot-'em-up is a bit misleading, as it's more of an avoid-'em-up than anything. The amount of time spend dodging debris and twisting through tunnels far outweighs that spent shooting things.

This is a real pity actually, because it can get thoroughly tedious. The variable weapons system, although cribbed from Hellfire, is quite entertaining. That said, the weapons are the most entertaining thing about Greylancer. The graphics aren't that bad, the presentation is fine, and the sound is okay if nothing great.

There are a couple of problems with the playability though. Firstly, a credit is a long time to wait to change your targetting program if you make the wrong decision. Perhaps calling up the menu when the game is paused would be a better idea. Secondly, the afterburner trail and the sparkly tracks left by your ship often make it very hard to see just what's going on when the screen fills up. Many fatal bullets remain unseen thanks to the haze of spangly effects, and even some aliens find themselves masked by this screen.

However, seen-it-all-before blues are the real down point of Greylancer. Although spotting which game each idea/alien/level has been stolen from is quite fun for a while, it doesn't excuse the almost absolute lack of original thought which went into this game.

Presentation 92%
P. Lots of options and great presentation throughout.
N. Skipping through some of the intermissions can get tiresome.

Graphics 70%
P. Some impressive looking bosses and backgrounds.
N. Sprites and effects are generally poor, and the backgrounds are of inconsistent quality.

Playability 63%
P. Quite nippy and responsive.
N. Unoriginal and the action doesn't take long to get tedious.

Lastability 45%
P. Eleven levels to take on...
N. ...but they shouldn't take more than a day or two to complete.

Overall 48%
Tries to "remix" a load of old ideas without much success. Thunderforce III or IV, Gynoug, Bio Hazard and Hellfire are all miles better.

Calling Greylancer a shoot-'em-up is a bit misleading, as it's more of an avoid-'em-up than anything... Thunderforce III or IV, Gynoug, Bio Hazard and Hellfire are all miles better.