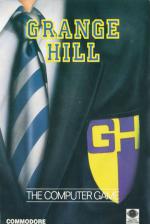 Gonch, one of those cheeky chappies from Grange Hill, has had his Walkman confiscated by the maths teacher. This is disastrous for the poor fellow as his Mum always asks to see it when he comes home (?!), and if he hasn't got it... well, it doesn't bear thinking about. Consequently the lovable rogue has decided to slip back into school after hours and retrieve the said Personal Stereo. Hollo, Gonch's partner in crime, comes along to offer help and encouragement.

The display is split into two sections, with the top half showing a side-on view of the action, and the bottom half reserved for a text readout. Lett or right on the joystick movements convey Gonch in the relevant direction, and walking off the screen results in a fresh one being bought into view. Occasionally, the two mates are required to clamber up or down obstacles - this action is also joystick controlled.

Pressing the fire button accesses a "commands" menu. Using a joystick-controlled icon, the player can make Gonch pick up/drop, example, use, give/take objects, or talk to other characters. If the 'talk' or 'use object' options are selected, the player has then to type in the desired message or object name.

At the bottom right of the screen is a clock which ticks away throughout. If it reaches twelve and the Walkman hasn't been recovered Gonch has to return home for an ear-bashing. If he does, everything is hunky-dory and everyone can live happily ever after...

What a disastrous waste of a licence this has turned out to be. It's awful, and left me wondering if it's really finished; atrocious spelling mistakes, poorly constructed sentences, abysmal graphics... I could go on, but it's only rubbing salt into the already gaping wound.

To be fair, some of the flavour of the television series has been captured - it just hasn't been captured at all well. It's about time that Argus Press pulled their proverbial socks up, and put a little more thought and care into what they release.

Here is one of the shoddiest, lacklustre, most pointless, unrewarding and unprofessional pieces of full-priced software I've had the misfortune to load into a Commodore.

Not only is it full of bugs and spelling mistakes, it is also boring and completely fails to capture the atmosphere of the telly series.

Some of the bugs are totally stupid. For example, in one location you can walk on the surface of the canal quite happily, but if you jump the character falls straight into the drink - perhaps his bounding around breaks the surface tension?!

Another annoying factor is the game structure, stupid things like tripping over a broken paving slab or banging into a bollard can bring an untimely end to the game - hardly realistic for a sprightly schoolboy!

The graphics are pathetic - the badly animated, extremely low-res sprites skate around on what looks more like a nuclear aftermath than a London suburb. Even the storyline is woeful - a game to buy for your worst enemy perhaps?

Argus Press seem to have hit a bad patch recently, and Grange Hill does nothing to alleviate this. While following a moderately novel (albeit silly) scenario, the game is made difficult and annoying to play by the number of bugs that litter the program, such as the strange canal and sprites that float around the screen. The spelling and English used throughout is appalling: 'crackeling', 'liying' and so on. If a software pusher comes up to you on the street offering this rubbish - just say no.

Presentation 66%
The useful icon system is let down by bugs and spelling mistakes in the text.

Sound 65%
An unsuitable run-of-the-mill Dave Whittaker tune plays throughout and adds nothing to the atmosphere.

Hookability 31%
An interesting idea which may attract for a few plays.

Value For Money 11%
Watch the telly series and spend your cash elsewhere.

One of the shoddiest, lacklustre, most pointless, unrewarding and unprofessional games I've had the misfortune to load... Full of bugs and spelling mistakes, it is also boring and completely fails to capture the atmosphere of the telly series.